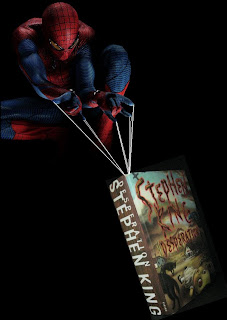 I thought the new Spider Man movie, “The Amazing Spider Man” was off the hook awesome! And, it had a couple of nods to some people I like.

First, there is a quick nod to Stephen King. Did you catch it? During the fight scene in the library, a set of books is knocked over. The only name that stands out is the one – white on brown – “STEPHEN KING.” Come on, you saw it, right! That could only be the side of Desperation. I’ll leave it for you all to tell me why Desperation, or Stephen King, get a second in The Amazing Spider Man. By the way, you may have missed it because it’s right after the scene where Stan Lee was walking through the library.

Second, there was a nod to Alfred Hitchcock. This one is more obvious, as it comes in the form of a poster in Peter’s room. There is a large Rear Window poster that gets several shots.