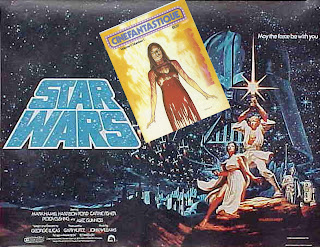 I'll be posting an article in my 10,000 magazines series about the May, 1977 Cinefantastique which featured several of the original Carrie interviews. However, in reading through the magazine, I came upon a short review of Star Wars.

Star Wars and Carrie have a lot in common:

1. DePalma and Lucas shared cast tryouts to save time and money.
2. Both would launch the careers of several movie stars.
3. Both would be landmark films for their directors.
4. Both starred a lot of young unknowns.

. . . still trying to decide if Carrie was a good Jedi or bad. . .
Like a certain lead character in Star Wars, she needed to learn to control her anger and use it for good, not revenge. But all that would come later, in the super incredible prequels!

It's interesting to read what people thought about movies when they first came out. Often the lore of a film slants any new reviews. Would anyone now, knowing what we know, give Star Wars a bad review? I mean. . . a really bad review? Well, there it is! Cinefantastique, 1977 crucified it!

The big news as we go to press is the opening of Star Wars to what appears to be broad acceptance and popularity. The film is a unique achievement in special effects, but beyond that there's not much more to add. If you ever wondered what Flash Gordon would be like with decent special effects, you now have the answer: Just about the same. I had hoped director George Lucas would add some dimension to the film's bald adventure storyline, but what you see is all you get. Most viewers seems too in awe of the amount and scope of the visual effects to realize that behind the pretty pictures and slap 'em, zap 'em action there is nothing, no theme, no intellect, not even an idea.

Lucas has wisely avoided calling his film science fiction, and as a hedge against criticism admits it's just juvenile fantasy, nothing more. But juvenile fantasy can be great stuff, though not in Lucas' hands. For a film that takes place in a "galaxy, far, far away," there is a sad lack of that sense of wonder and mystery that comes from penetrating the unknown, that supreme prickly tension that makes young eyes and minds open wide in good juvenile fantasy films like Journey to the enter of the Earth and The Time Machine. This lack in Star Wars results from Lucas using all the props and window dressing of the genre without capturing its essence.

In Star Wars, a laser sword might just as well be a broad-sword and the outer space battles merely the World War II dog fights they are patterned after, because all this film amounts to are bits and pieces of westerns, swashbucklers,  and sundry adventure genres that Lucas has traced over into the costuming of space opera.  What a disappointment.
On the other hand, we still have Steven Spielberg's Close Encounters Of The Third Kind to look forward to, in the hope that its popularity will prevent the science fiction film boom from heading off in the pointless direction of Star Wars.

That's wonderful!  I mean it.

Clarke was the owner/creator of Cinefantastique.  Just note how interesting it is to see through the eyes of the moment, instead of the eyes of history. When you see something for the first time, with no cultural influence -- unfiltered -- you might come away with a different impression than someone who has 30+ years of history telling them, "This is going to be a good film!"

Cinefantastique was a wonderful magazine that not only was filled with very informative articles, but original artwork and a lot of photo's; in fact, a lot of color photo's for the time.


Cinefantastique ''is by far the most useful U.S. fantastic-cinema magazine, being less juvenile in orientation and (apparently) less dependent on the studios for pictorial material, and thus more independent in its judgments'' than other such magazines (HERE)