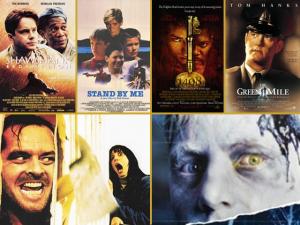 About The Shining, Haulotte wrote: “I'm never really sure why I love this movie so much. The feeling of claustrophobia and living in a so called haunted hotel, just adds to a good plot. The movie is slow at times but that adds to the suspense. Watching Jack Nicholson go slowly crazy is what makes the movie and Shelly Duvall trying to keep things smoothly. It's creepy.”

Those are all good choices – so good, every one of them has been (or is being) remade.  Salem’s Lot has been made into TV miniseries twice.  There was also “Return to Salem’s Lot” – which I have not seen.  Pet Sematary has a sequel and there has been talk about remaking it.  Carrie got a sequel, a television remake and now a new movie treatment.  The Dead Zone was turned into a TV series.  And, of course, King and Garris remade The Shining as an ABC mini-series.

Why The Stand?  That’s another blog post, but primarily because: 1. It kept the bigness of the story.  2. The plot was essentially intact.  3. The acting was great.  I particularly liked Flagg and Stu.  What the Stand failed to do was scare!  The scene in the tunnel wasn’t as scary as it was reading it.  However, I don’t know that was possible.

HERE is a list of all Stephen King movies.