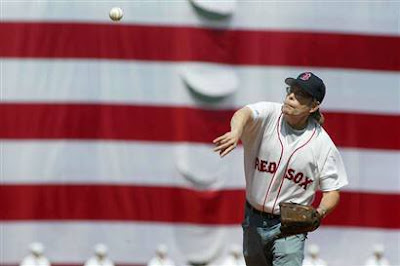 So I'm listening to Under The Dome and there is a scene early in the book where a letter from the President of the United States is read. It promotes Barbie to Colonel, calls for a day of prayer, discusses options that were considered and disgarded, outlines why telephones are not able to go outside the dome, clarifies that phones should work inside the dome. . . and more.
.
I found myself thinking: Presidents don't talk this way. We all wish they did, though. The letter was specific, lengthy and very clear. It wasn't just full of froof, it had substance. It wasn't just a "yes we can" speech, it was a "here's what you're going to do" speech.
.
So I'm wondering: Since King isn't locked up in his study writing that next Dark Tower novel anyway. . . can Mr. Obama have him for a while? I mean, maybe just to have King explain the Health Care bill to us. Have him direct communications for a while, and I'll bet everyone will get excited again.
.
This should be a nice marriage! King and Obama are both democrats, both committed American's and both on the liberal side. But King is able to break things down in specifics. After listening to the West Point speech, the one that put troops to sleep!, I think some punchy writing is in order.
.
I saw O'Rielly offer himself to the president recently as an advisor. Please, sir, no! (Big Jim really does come to mind) Of course, it's not for King to offer, it's for the president to call. Send him one of those emails that promotes him to Colonel and he can't say no.
.
Rebublicans and late night talk shows would love having King over at the White House -- no end to the "master of horror" writing the presidents speeches quips. But who cares about them! As an American citizen I can make a citizens arrest. . . can I make a citizens nomination? Dear Mr. President, I nominate Stephen King for White House Communications Director.
.
OH! And, Mr. President, when he works for you, would you please give him a direct order to write the next Dark Tower novel? Thank you, sir.
.
It's just a thought. . .