Reviews and Thoughts by Derick From Brasil 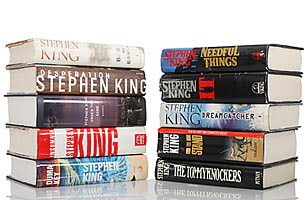 My friend Derick is from Brasil. We talk often by email about Stephen King. He's sharp, as you'll discover in his article below. I asked him to write me an article about what it's like being a King fan in Brasil. My friend is 17, very sweetly humble and a very fast reader. I hope you enjoy this as much as I did! By the way, I like the fact that Derick is honest in his opinion; he doesn't gush and he's not afriad to share honest thoughts. So, here's one constant readers take on the Stephen King universe!
.
Stephen King (SK) happened to me about one year ago.
.
When I first saw him I said: This guy is nuts! Mainly because he's staring in a lot of his own movies.It happened while I was still in the school. A friend of mine said: "My brother loves reading his books." So, I tried. Started with The Shining and didn't like it, although it's not a bad book. The Shining (I read it in Portuguese) I thought was a great story with such a bad ending. I really think SK cannot make a great ending at all, but, anyway, I love his stories. Then, I tried reading English versions and the first was The Eyes Of The Dragon. Horrible book, to me, by far, the worst I've read from him (I may be wrong but that was I felt when it ended), kind of fairytales.
.
I had many reasons to stop reading Sk but I didn't and won't. I really thought: "He's so famous, he has to write something good." That was when I read Needful Things. And, Oh My Godness, I really loved it. The plot itself is amazing but a lot of characters. The next one I read was Bag of Bones, and I have to say: Amazing beautiful great story. Kyra almost made me cry and I really enjoied it. There are a lot I read: Desperation, The Dark Half, The Gunslinger, The Drawing of The Three, The WasteLands, Wizard and Glass, Skeleton Crew, 'Salem's Lot and The Bachman Books (not a wide list but not short neither).
.
I'll talk about each book I've read:
.
- Desperation: Excelent story, good for those who like action books (like me), but the ending was bad. David Carver really got my atention.
.
- The Dark Half: You can read it so fast, it happened to me and no other book did this to me. Very good plot, bad ending and so many questions not answered. I loved Thad's Twins... They're awesome.
.
- Skeleton Crew: I had not read all of the stories but I read a few ones. Pretty good, it depends on each tale.
.
- 'Salem's Lot: Horrible Book! The ending almost made me throw this book away. Messy most of the times.
.
- The Bachman Books: I read The Long Walk which was amazingly good, the splot is wonderful and I wish SK could tell us what Ray asked after winning The Long Walk. I read Rage too. Indeed, I only bought this book because of Rage and it's a book full of nothing. It was a bad book (Rage).
.
- The Gunslinger: Loved that book. The best I've read from The Dark Tower. It tells us exactly what Roland is and Jake.
.
- The Drawing of the Three: Good book, it shows us all characters but boring at times, it only got my atention after Detta and Odetta story, but good.
.
- The Wastelands: Another action book. Nothing to say unless It's good.
.
- Wizard and Glass: Excelent in the beginning, stopped reading after flashbacks. Those flashbacks spoiled the whole story.
.
I really have to say SK is a genious not only for writing books but having the ability to creat so amazing stories and be able to make them to come true. I love him and his books although not all are good. David asked me to write something. I really appreciate that but I don't know if I was capable to do such a thing, I wish I would. I'm a great SK fan but not like David. I wanted to introduce myself in the ending because being Bra"s"ilian boy is not a compliment at all. Sorry if I made any mistake but my English cannot be compared to yours.
.
I'm from Bra"s"il, I'm 17 years-old and live in São Paulo. Here, in Brazil, SK is not famous here (everybody asks me "Who is Stephen King" and they can only know who he is when I say: "He wrote The Green Mile", and I really liked chatting with you and exposing my thoughts, it was good. Thank you once more,Dérick.

Email ThisBlogThis!Share to TwitterShare to FacebookShare to Pinterest
Labels: Derick from Brasil, Desperation, Reviews, Richard Bachman, Salem's Lot, Skeleton Crew, The Dark Half, The Dark Tower, The Drawing Of The Three, The Wastelands, Wizard and Glass