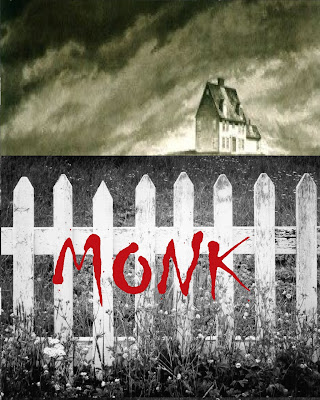 My wife is inflicting old Monk episodes on me. Thanks family for the DVD's! So, Monk fills our screen when I could be watching something purpose-filled, like Storm of the Century.
.
But would you beleive even Monk makes references to the Stephen King universe? Well, not Monk exactly, but as they investigate a case that involves mauling, Strottlemeyer says, "Animal control warned her about cujo at least twice." Of course, this is not just a quick reference, but one done in right context. (Season 6, episode 1)
.
Actually, that's the only connection between King and Monk that I know of.
.
The episode itself, "Mr. Monk and the biggest fan" is rather Stephen Kingish itself. Either in a true life sort of way (ref the guy breaking into King's home) or in a Paul Sheldon Misery sort of way. I wonder if the connection was deliberately made using Cujo because King was the inspiration for deling with the biggest fan.