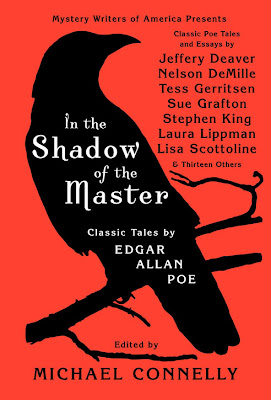 My mother loves Edgar Allan Poe. I prefer Stephen King. Understand, I don't dislike Poe. I just think King is better. 2009 was the 200th birthday of Edgar Allan Poe -- so, before the year runs out, let me offer up this post. This subject is bigger than my brain at the moment (as are most subjects) so I'll post more as I learn. Please post connections I miss between King and Poe.
.
Some comparisons:
.
In tone: The Gunslinger reminds me of Poe's style of writing. It keeps me off balance and a little bit depressed.
.
Narration: Probably unintentionally, King's Dolores Claiborne has hints in style to The Tell Tale Heart. It is a rambeling monologue where there are moments if you wonder if the narrator (Dolores) is totally sane. And what does she have to confess? Murder!
.
There are some slight similarties in their biographies. For instance, both dealt with drug addiction. In his book On Writing, King openly refutes the idea that drugs make an artist a better artist.
.
Of course, King writes novels, Poe wrote poetry and short stories (novella's?)
.
Nick Mamatas at The Smart Set writes, "Poe was one of the first authors of modern horror in that he was not interested in resolving the social trespasses his work depicted with pat morally correct endings or appeals to cosmic justice. In this way, he was also one of the only modern purveyors of dark fiction. The bloodiest slasher flicks often betray a Puritanical ideology, with only the virginal characters allowed to survive. Gangsta rappers love their mamas and write songs about them. Noir writers made sure their sleuths had a code of ethical conduct, even if it only consisted of a single line they would not cross but that the baddies they hunted would. Stephen King's novels summon up dark miracles that threaten families, towns, and occasionally civilization itself, but these evils are put down more often than not thanks to the power of friendship. Poe's an acquired taste."
.
What I like about Poe:
.
Fall of the House of Usher.
.
The Pit and the Pendulm
.
The Raven
.
The Tell Tale Heart
.
The Cask of Amontillado
.
Why King Is Better:
.
If Poe had lived longer, I think he would have produced even better works than what he had to offer the world. Stephen King is better at terrifying us, giving us a good story and laying out chilling prose partly because of experience. After writing novel after novel after novel and short story and even poetry, King has mastered the craft.
.
Poe tends to build off a single idea, moving the story into that idea and then drawing it to a conclusion. King novels involve multiple ideas being drawn together. Also, I think King does more editing than Poe did. A personal trait I admire on King's part. The flowery langauge isn't as important to King as telling the story. So you don't sit under a tree and recite King to your love. . . but his stories stick with you long after they are read.
.
By the way. . .
.
Those of you who are looking for an original copy of The Gunslinger, or that very rare Salem's Lot (you know THE ONE. . .) might do better to hunt for a copy of this book:
.
Poes first book, Tamerlane and Other Poems, just sold for 662,500. Yikes!
.
http://www.thesmartset.com/article/article01060902.aspx
.
It is reported that only 40 or 50 copies of “Tamerlane” were printed -- talk about small press! Of those 40-50, only 12 are thought to still exist. I guess the others hit the library discard pile.
.
Also, in The Shadow of The Master (Poe stories with attached essays by famous authors), Haper Collins says, "Stephen King reflects on Poe's insight into humanity's dark side in "The Genius of 'The Tell-Tale Heart.'" Sounds interesting.
.
Of course, the real reason to prefer King over Poe is that Stephen King has cooler book covers. So there.
.
See also: http://talkstephenking.blogspot.com/2010/03/edgar-allen-poe-and-stephen-king.html