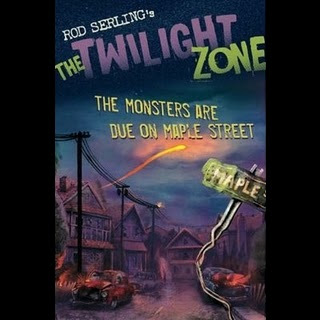 Monsters On Maple Street
.
This book is starting to remind me of that Twilight Zone episode, "The Monsters are due on Maple Street." One of the things I like about King's writing is that he develops themes we are familiar with in new ways. Some seem to see this as a weakness, I enjoy it very much. Besides, King has the ability to up the anti. And I always believe that King gets his ideas out of his own head -- he's not stealing from The Simpson's or Twilight Zone. Anyway, Serling only gave us a quick "what if. . ." while King gives us the full answer "this is what would happen!"
.
Things that leave me scratching my head:
.
1. Coggins popularity. He is presented as a Jim Jones type, an over-bearing preacher who controls his people. And apparently a Pat Robertson fan (truly, that's the scary part). But after the Dome goes up, there seems to be very little attempts by the congregation (whoever they are) to gather. Usually in times of crisis people gather at their church's. And cults draw especially close, since the ignorant "sheep" don't know what to do unless someone tells them.
.
2. At the press confrence Colonel Cox is cut off by "that no spin yapper." ie: Bill O'Reilly. But he's not a reporter for Fox, he's a commentator. Thus allowing for more yapping -- sigh.
.
3. Is the Big Jim character realistic? I spent a lot of thsi book thinking that Big Jim was not at all rooted in a shred of reality. It seemed like King just took everything we don't like in humanity and jumbled them together into this strange character called: Big Jim. So track with me:
.
. . . no one likes used Car dealers, so Big Jim is a used car dealer.
. . . no one likes cults, so Big Jim is a member of a cult.
. . . no one likes politicians, so Big Jim is a politician.
. . . no one likes murderer's, so big Jim is a murderer.
. . . no one likes fake Christians, so big Jim is a fake Christian.
. . . no one likes drug dealers, so big Jim is a drug dealer.
.
Now at some point here, I'm going: Can we just have Randall Flagg back? Big Jim is a used car polotician cult attending murdering drug dealer?
.
And then we learn that Big Jim has gotten in trouble for unethical practices at his Used Car dealership. Can I just ask, real quick -- How does this guy get elected? Well, only in America! I once heard someone say that Ted Bundy could have been governor.
.
But, the more I think about it, the more willing I am to buy in to Big Jim. Mostly, King's "feelin' it" comments nailed it for me. Big Jim is all about power and self confidence.
.
My Grandfather pastored a church many years ago that was attended by Mr. Bill Suff. Worth mentioning because Mr. Suff was also a serial killer. Yep! he sang in the choir, and killed at night. Makes me wonder: Why would someone who has no problem killing buy into a faith that says that in the end, we stand before the judge of men. My only thought on that is that they think in Christainity they can find redemption -- or in Big Jim's case, power. One of those.