A once busy laundromat in Bangor was demolished today -- it has been closed since 2000.  According to WABI TV 5 it is the same laundry Stephen King once worked at.  (www.wabi.tv)


the New Franklin Laundry (where King worked for some time, giving him the inspiration for “The Mangler” and providing a backdrop for the novels Carrie and Roadwork.)


When asked what the worst job he ever had  was, King told Suspense Magazine,


When I washed industrial laundry for New Franklin Laundry in Bangor, twice a week (in summer) we used to get the table linen from Testa's of Bar Harbor. Testa's is a famous seafood restaurant, where the elite meet. But the elite never saw those napkins and tablecloths after a hot summer day in the back of a laundry pick-up truck. They stank, which was bad, and they were squirming with maggots. But I washed em, and. . . they came out clean.


Stephen J. Spignesi writes that King's experience working at the New Franklin Laundry inspired and informed The Mangler.  Spingnesi quotes King, "The first thing I am is a husband; the second thing I am is a father, the third thing that I am is, I'm a man of my place and time and my community.  And I have to be all those  things first because if I want to write, everything trickles down."  Spingnesi then notes, "The Mangler is stark evidnce of this: Everything trickles down." (The Essential Stephen King, p.261) 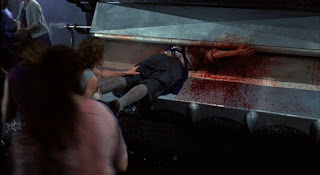 In an interview with Ben Rawortit (quoted  in Essential Stephen King), King discussed working at the laundry.  When Rawortit asked if that was "weird", King said, "THere was a guy who worked there who fell into the pressing machine, or 'mangler,' as you call it.  He was over the machine dusting off the beams when  he just lost his balance and fell."  Rawortit asked if the machine ate his hands.  "Yeah, it swallowed his arms.  So he had two hooks where his hands used to be."

I have not read The Mangler!  I don't know how this escaped me.  I will correct this quickly.