The new Stephen King Desk Calendar rocks!  I’m usually not real big on calendars, which is probably why I haven’t understood why everyone starts asking if a new SK calendar is coming out each year.  However, this years offering by the Stephen King Library is great!

The book is spiral bound so that it can lay flat on a desk.  It has a great 3D cover that is a collage of King stories.

This year, Duma Key and Just After Sunset both turned 5. Night Shift turned 35, Christine 30, Dolores Claiborne 20, Bag of Bones 15, and many more.  This Calendar is a celebration of these wonderful books!  It is a weekly hodge podge of Stephen King related articles.   It’s like owning a small pile of books about Stephen King.  I love the behind the scenes stuff, the articles and trivia.  In fact, it’s more fun than a book of just article, or just trivia. . . it’s a lot of stuff mixed together and arranged around great illustrations and a weekly desk calendar.

Famous authors birthdays are also included.  Charles Dickens was born February 7, 1812.  Important dates to the King universe are scattered throughout – such as Andy McGee’s birthday, or a note when John Lennon was shot.  You might also find some sports trivia dates . . . October 27, “In 2004, Red Sox win first World Series  since 1918.”

I liked The Stand 25th Anniversary Trivia.  Here’s one, “According to the novel, how old Is Mother Abigail?”  (108 years old) There is also a Night Shift Anniversary Trivia page.  Here’s one, “In I Am The Doorway” the protagonist is a retired astronaut who has become a pathway for aliens.  How do they aliens manifest and take control of his body?” (Eyeballs appear like a rash on his fingers that allow the aliens to view our world and then slowly take over the man’s body.)

Also included is a Dolores Claiborne 20th Anniversary Trivia, as well as trivia from several other books.

My favorite article was by Brian James Freeman, “Publishing a Stephen King Anniversary Edition.”  He discusses what was involved in putting together the special 25th anniversary edition of IT.  All kinds of stuff we never think about.  In particular, there w ere problems with the books size and how much they could actually include.  Freeman takes us from idea to sales, all of it a great ride.


“I always started the school year in my advanced class by handing out index cards, asking what books students had read over the summer.  Most were returned blank with excuses like, “Summer Job,” but there was one I received covered front and back.  Discovering we shared a fondness for certain authors – Stephen King, in particular – Jason syly asked if I would read some of his poetry.  His life and heart were in them.

Completely on a whim, I wrote the letter to Stephen King on my 40 year old typewriter and enclosed Jason’s poems.  Never dreaming that what we called the “SK Adventure” would actually happen... a few weeks later I got “the phone call.” ...

(the rest is in the Calendar) 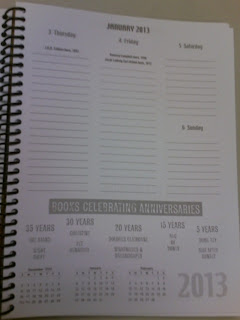 Here is the table of contents:

David's take: I'm surprised how much I enjoyed this.  I approached it thinking I'd just thumb through it, but found myself reading it cover to cover  with the same enjoyment I would have gotten from a Companion book about Stephen King.  With writers like Jay Franco, Kevin Quigley, Robin Furth, Brian James Freeman. . . this is a home-run!  I love it.
MORE AT:
http://www.stephenkinglibrary.com/
http://www.facebook.com/StephenKingLibrary
http://www.bomcclub.com/