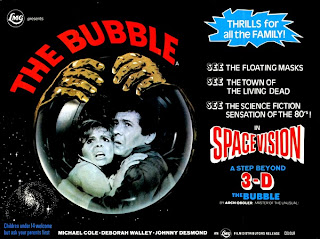 Remember all the complaining that went on when King published Under The Dome?  It was  compared to The Simpsons. I was doing some research today into Arch Oboler, one of the radio's great scare masters.

One of Oboler's films was titled, "The Bubble."  Guess what it was about!  From Wikipedia:


A young couple, Mark (Cole) and Katherine (Walley) are traveling on a small airplane and are forced to land in a remote town where the people are behaving oddly. They then attempt to escape from the town, but discover that there is a giant glass-like force field bubble around it that prevents anyone from leaving.

TCM gives a fuller synopsis, including these tidbits:


the visitors discover that the area is covered by a huge, transparent dome and that once a week a resident disappears, presumably to be studied by the aliens who have trapped the community in a "zoo." Mark and Catherine take refuge in an old mill in the countryside while Mark attempts to dig an escape tunnel under the dome.

Unfortunately, the movie gets terrible reviews!  Apparently Oboler's great success in radio did not transfer naturally to the big screen.  Alas, the theater of the mind is best of all.  The poor reviews, bad acting, bad directing, might explain why Oboler chose  not to show viewers any of the film int he preview below!

Email ThisBlogThis!Share to TwitterShare to FacebookShare to Pinterest
Labels: Arch Oboler, Under The Dome