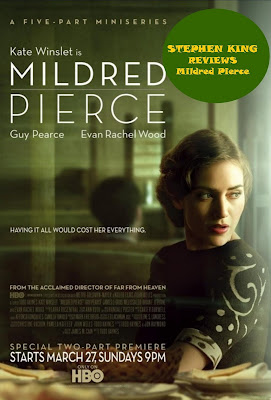 Here is a chatty review of Mildred Pierce (HBO mini-series) by Stephen King. It was posted March 20, 2011. I always enjoy King's take on current trends and culture.
.
There’s terrific acting in Todd Haynes’s chilly remake. Melissa Leo gives a tough-as-nails performance as Mildred’s one friend, Brían F. O’Byrne is perfect as Mildred’s clueless but basically good-hearted first husband, and as for Winslet and Pearce … holy crow.
.
But don't expect just praise and gushing in this review. King is always honest with his readers! His primary complaint: Length! Yes, he does see the irony for him -- of all people on planet earth! -- to say something is too long.
.
King writes, "All the same, there are problems here. Haynes has shown his love for the Hollywood version of America’s past before, most notably in the remarkable but equally hard to like Far From Heaven (2002), and here it has gotten out of control. In words of one syllable? It’s too damn long. I suppose that sounds impudent, coming from a guy who’s written several doorstop-size novels, but I stand by it. When Emperor Joseph II purportedly told Wolfgang Amadeus Mozart that his new opera had too many notes, Mozart supposedly replied, “Only as many as necessary, Your Highness.” Using that metaphor, the Haynes version of Mildred Pierce has way too much sheet music."
.
One more wonderful line from King -- I can't resist: "Winslet’s Mildred is a genuine star turn. How Joan Crawford would have loathed her." HA! I love it!
.
Okay, here's the full review by Stephen King:
http://www.thedailybeast.com/blogs-and-stories/2011-03-20/stephen-king-reviews-hbos-mildred-pierce/