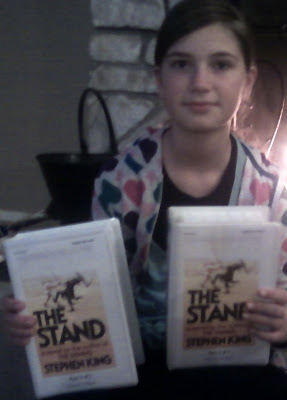 picture: Sharon holds volume 1-2 of The Stand.
.
My wife bought me the Stand on audio tape, read by Grover Gardner. I'm really enjoying it! She had the tapes sent directly to a company that converts tapes to CD. They also put them on MP3 for me.
.
We used: Thick And Mystic Media to professionally transfer the material. http://www.audiomover.com/ They did great! The sound quality is superb (these tapes were pretty old, and there are absolutely no sound issues thus far). Each chapter serves as a separate track.
.
If you want it on CD, you have to actually buy the audio tapes and then transfer them. However, Ms. Mod at stephenking.com answers the legal question of transferring your tapes to CD as follows: "That shouldn't be an issue because it's for your own use but it's the people who are making multiple copies and selling them which is clearly violating copyright laws that we have a problem with." http://www.stephenking.com/forums/showthread.php/15950-The-Stand-on-CD
It appears that when this was originally recorded, unabridged recordings were not sold in mainstream book stores. It was more popular to abridge recordings for mass sale. So the unabridged books were primarily for libraries -- catering to the blind.
.
So far, the book is fantastic. I've read this edition once before, but it was years ago.
.
Details: 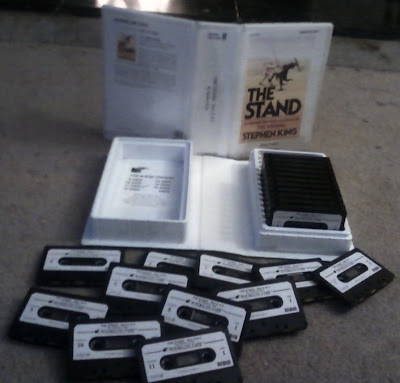