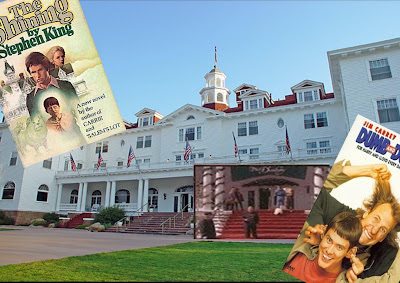 So I'm watching Dumb and Dumber. Don't judge me. And when they finally make it to "Aspen". . . guess what hotel exterior I spot; that's right, it's the Stanley Hotel. Of course, it's not in Aspen, but who really expects the brilliant minds who made Dumb and Dumber to actually be able to find Aspen, eh!
.
Of course, in October 1974, King spent the weekend at the Stanley hotel. He and his family were the only guest there, because the hotel staff was clearing out for winter. King's own version of The Shining was filmed at the Hotel in 1996, just two years after Lloyd and Larry made their visit. In Dumb and Dumber it was the Danbury Hotel.
.
If only. . . Larry and Lloyd had an opportunity to meet our friend Jack -- the end of Dumb and Dumber would be so much better.