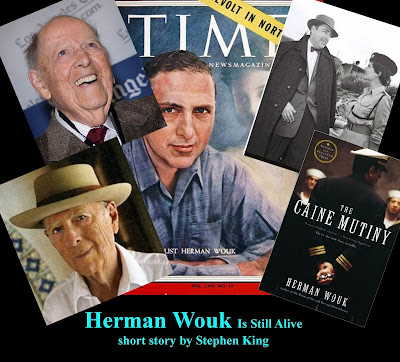 stephenking.com reports: "Stephen King’s short story, “Herman Wouk is Still Alive,” will be published in the May issue of The Atlantic, on newsstands April 19 and available on the web and to subscribers a week earlier."
http://www.stephenking.com/index.html
.
Herman who? Wouk worked for Fred Allen as a writer. Fred Allen was famous on old radio and early television. As a Jack Benny fan, I don't know about this Mr. Wouk! (Benny and Allen had an ongoing feud that was awesome!) In fact, just think of all the Jack Benny digs this Wouk has probably written. He later served in World War Two.
.
On a more serious note, he is the author of many historical novels, most notably The Caine Mutiny and Winds of war. He won a Pulitzer Prize for Caine Mutiny. His most recent book is The Language God Talks. He is Jewish and has written a lot about Israel. Awesomely cool to me, he lives in California! (Not too far away)
.
Website: http://www.hermanwouk.net/index.html
Biography: http://www.hermanwouk.net/biography.html
On What's My Line: http://www.youtube.com/watch?v=lXiiuVtu5AA
On Amazon: http://www.amazon.com/Herman-Wouk/e/B000APY7U4