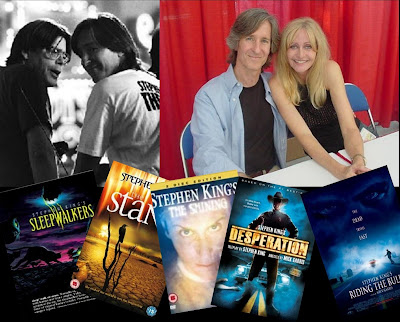 Fangoria has posted a great interview with Mick Garris.
.
http://www.fangoria.com/index.php?option=com_content&view=article&id=3745:mick-garris-the-early-years&catid=36:demo-articles&Itemid=56
Here are a few quips, but check out the full interview.
.
About Sleepwalkers: "The reviews were just terrible, but there are things in that film that I’m very proud of. It’s definitely not my favorite, but I love the goofiness of it. You spend a year of your life on a film, so you just can’t make a film that doesn’t have things you’re proud of in it. Stephen and I definitely went into that one with the idea that we were making a B movie. "
.
Asked if his association with Stephen King has created any studio backlash, Garris says it has. In fact, he recounts losing a Dean Koontz movie because he's "the Stephen King guy."
.
More interesting is what he says about The Shinining (Garris directed the mini-series). He says, "But most of the backlash I get is from the Kubrick fans who can’t believe that we remade THE SHINING. I take a lot of heat from them. But we just wanted to make something truer to the book. But, any negatives are far overweighed by the positives. Stephen is just an amazing and generous guy."
.
Garris calls Riding The Bullet his most personal work.