Stand By Me Cast Reunites 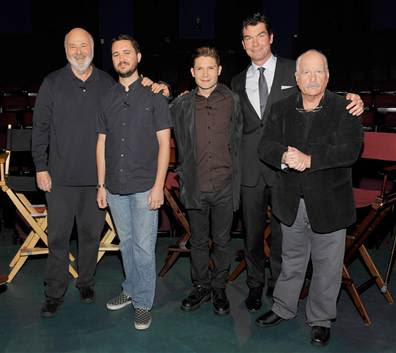 Picture: http://today.msnbc.msn.com/id/42150799/ns/today-entertainment/
.
msnbc has an article titled "25 years later, 'Stand By Me' cast reunites : Jerry O'Connell, Corey Feldman, Wil Wheaton turn out for anniversary interview."
.
Three of the old gang showed up Thursday at Toluca Lake, California for a 25th Stand By me reunion. Jerry O'Connell, Corey Feldman and Wil Wheaton — the three remaining principal stars of "Stand by Me" — reunited at the Falcon Theater in Toluca Lake, Calif.
.
Of course, River Phoenix died at the young age of 23 of a drug overdose. The article gives this update on the other stars: "As for Phoenix's costars? O'Connell (who was a pudgy pre-teen in the flick) is now married with twins to Rebecca Romjin and stars in the TV series "The Defenders." Wheaton went on to become a regular on "Star Trek: The Next Generation" and other sci-fi TV shows and films, and has a popular blog, Wil Wheaton Dot Net. He's also married with two stepsons. Feldman has had his own struggles with drugs and alcohol, and in 2010 mourned the loss of his pal and fellow child star Corey Haim. He is now a lead singer for the band The Truth Movement."
.
Will Wheaton also appears from time to time on Big Bang Theory -- as Sheldon's arch nemesis.
.
http://today.msnbc.msn.com/id/42150799/ns/today-entertainment/

Email ThisBlogThis!Share to TwitterShare to FacebookShare to Pinterest
Labels: events, Stand By Me