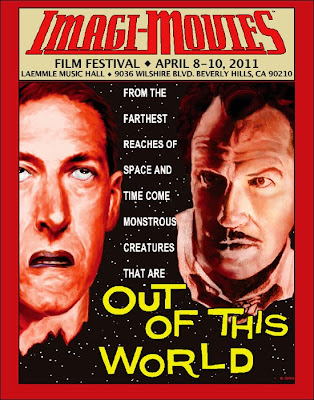 Dread Central is reporting some changes to the Monster Film Festival.
.
The three-day event will be held at the Laemmle Music Hall in Beverly Hills, CA, located at 9036 Wilshire Blvd., from April 8-10, 2011
.
From the Press Release:
The Imagi-Movies Film Festival 2011 continues in the spirit of Famous Monsters, inspiring the imagination of storytellers worldwide. Along with the independent films from our FM Film Festival finalists, the Imagi-Movies Festival will celebrate the Vincent Price Centennial with daughter Victoria Price and the 80th anniversary of Universal's Frankenstein and Dracula with the Lugosi family. Additionally, the theater will feature exclusive previews for upcoming horror films such as Universal's The Thing, a rare collection of Stephen King's Dollar Babies exposé, and a Famous Monsters and the H.P. Lovecraft Society's compilation of Lovecraft films in honor of one of horror's iconic writers.
.
Come enjoy a weekend of movies and filmmaking with fans and even take home some tools of the trade during live panels with some of the leading names in Hollywood.
.
Stephen King's Dollar Babies:
Autopsy Room Four
Disciples of the Crow
Flowers For Norma
Home Delivery
The Man Who Loved Flowers
Night Surf
Paranoid
Popsy
Rainy Season
The Road Virus Heads North
Strawberry Spring
Umney’s Last Case
Stephen King Panel featuring Mick Garris, Jay Hoben, Peter Sullivan, Mark Lester, Pete Von Sholly
.
http://www.dreadcentral.com/news/43192/details-famous-monsters-filmland-imagi-movies-film-festival-beverly-hills-ca