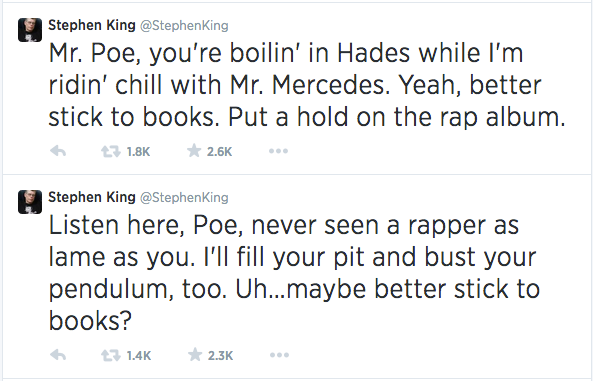 The relationship between Poe and King is discussed in Stephen King, A Face Among The Masters.  Here are a couple of short quotes from the chapter, "The Ghost Of Edgar Allan Poe,"


Stephen King’s story, Dolan’s Cadillac, is a brilliant tale of revenge. And guess who’s lurking in the shadows; why, it’s none other than King’s twisted grandpa, Edgar Allan Poe. King’s story is quite reminiscent of The Cask of Amontillado.

The two stories are similar in plot, tone, perspective, and even dialogue. King does more than just update Poe’s story; he adds a layer of richness to plot itself. Why does Montresor despise Fortunato? We’re not told. Frustrating , isn’t it? King supplies a motive for Robinson to so carefully plan Dolan’s demise. Poe was interested in the straight plot of the story, how the revenge might be carried out. King understood that giving the reader an emotional reason to hate Dolan would make his death all the more delightful. And as Dolan dies, the reader is invited to celebrate with Robinson.

Email ThisBlogThis!Share to TwitterShare to FacebookShare to Pinterest
Labels: Edgar Allan Poe, Stephen King A Face Among The Masters, twitter