What Happened to Carrie? 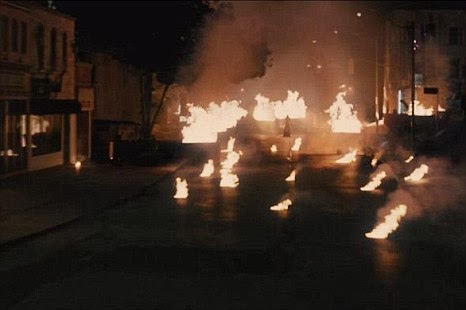 I think this is pretty interesting!  And now I want to see the real thing.  I'm sure all of you will, too, after reading this.  Click on the images for higher resolution.

Many people asked: Why another Carrie when the 1976 original was so iconic and the story itself already had a [forgettable] remake in 2002? It seemed that the Studios wanted something closer to the source material. And with director Kimberly Peirce at the helm, known for her edgy work with “Boys Don’t Cry”, many expected something far different than previous adaptations.

The first footage we saw of Peirce’s Carrie revealed a plot point generally forgotten in the story, the town destruction. This sequence of events were even promised by the filmmakers themselves and used as the teaser - Carrie standing amongst the fire of burning buildings in the town square with narrations from the investigation. Originally set for a March 2013 release, the film was pushed back to the October 2013 release when additional filming was needed to, apparently, make the film darker and scarier. And when we finally got the chance to see Carrie, finished and presented to the masses as the only horror film for Halloween, we were shocked to see a virtually scene-by-scene remake of the 1976 film - with the town destruction now completely gone.

It's come to the attention of many fans that the final cut eliminated many pivotal scenes from the novel that was filmed: The Rain of Stones, The White Commission, and the town destruction being just three of the storylines/elements that were removed during the editing process. Some of the cast members have come forward and confirmed that there were a lot of things deleted. Michelle Nolden, who played an adult Estelle Parsons during one of the several Commission scenes, commented about the editing floor being a sad place for Carrie after viewing the final cut. Mouna Traoré [Erika] commented that an extended cut would reveal the fate of her character! And Connor Price [Freddy "Beak" Holt] commented as well about the cuts. 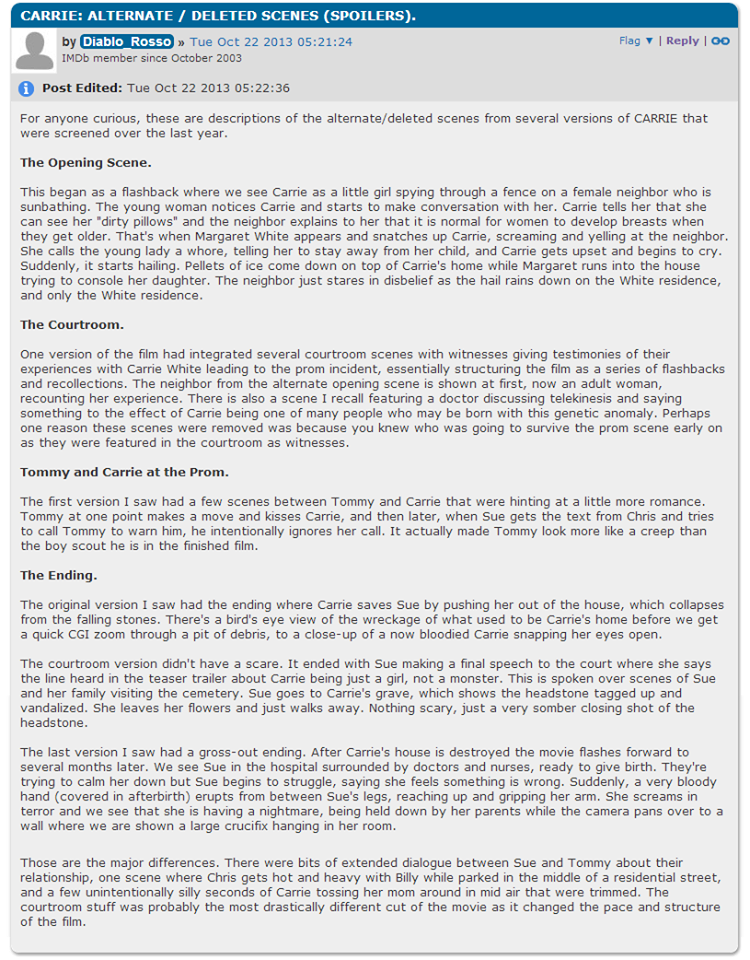 Carrie fans everywhere want to know what happened to the film?

Confirmations have been made by those who previewed the film back in December 2012 as test audiences, who stated that Carrie was much different from the final cut - the film originally told through flashbacks.

No one is quite sure what happened to Carrie - just based on the fact that so much was removed. When asked by a fan what happened to the final cut and why things were shortened or completely removed, screenplay writer to the film, Roberto Aguirre-Sacasa publicly commented that much was removed because director Kimberly Peirce did not want to go for something new. He’s also publicly commented on one of the Carrie fan-pages on Facebook that it was not the fault of the studios. Kimberly Peirce has been pretty tight-lipped on the subject. Though when asked about her alternate ending and why it wasn’t featured in the theatrical cut, she simply told the interviewer to ask those in power. There's definitely an interesting story here! 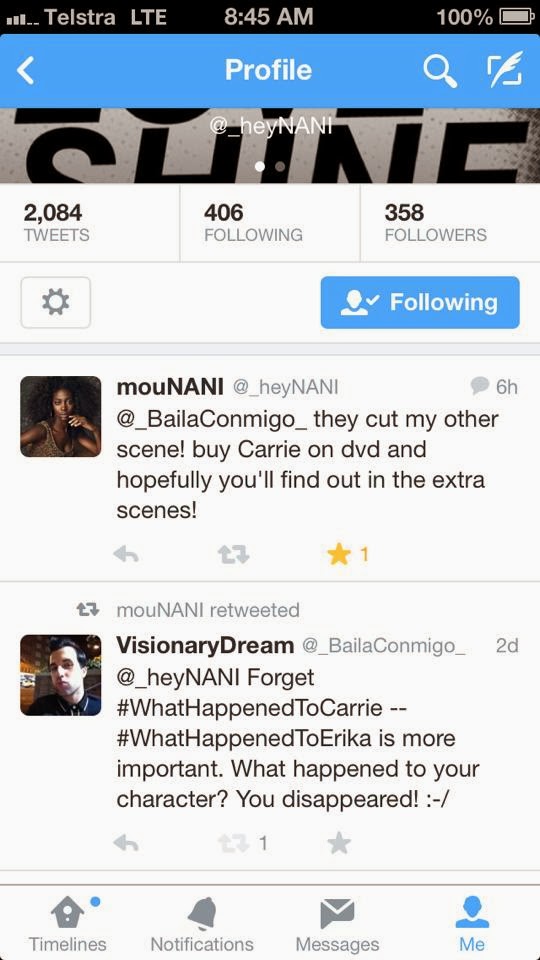 A petition is online right now to see Carrie restored to its original cut with all deleted or extended scenes restored within the film. The petition has reached nearly 2,000 signatures and has even been acknowledged by some of the cast members of the film, most recently by Samantha Weinstein who played Heather. Fans have also been taking to youtube.com in an effort to spread the word about the petition, making their own advertisements. While Kimberly Peirce has not publicly commented about the effort for an extended cut, she has acknowledged the petition by liking the link when it was sent to her by a friends through a comment. 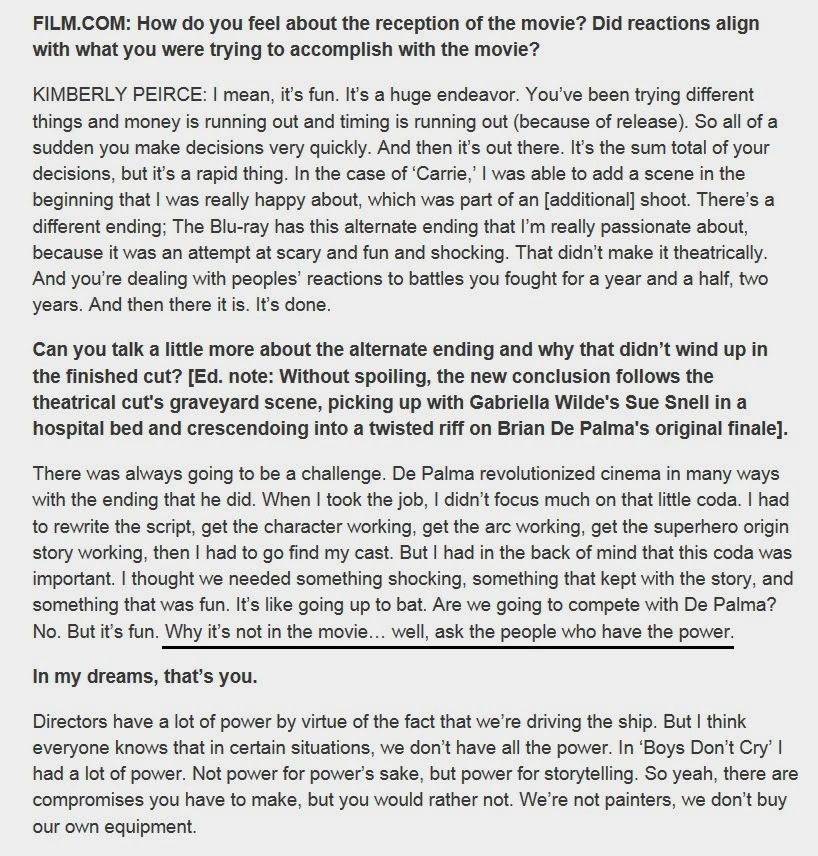 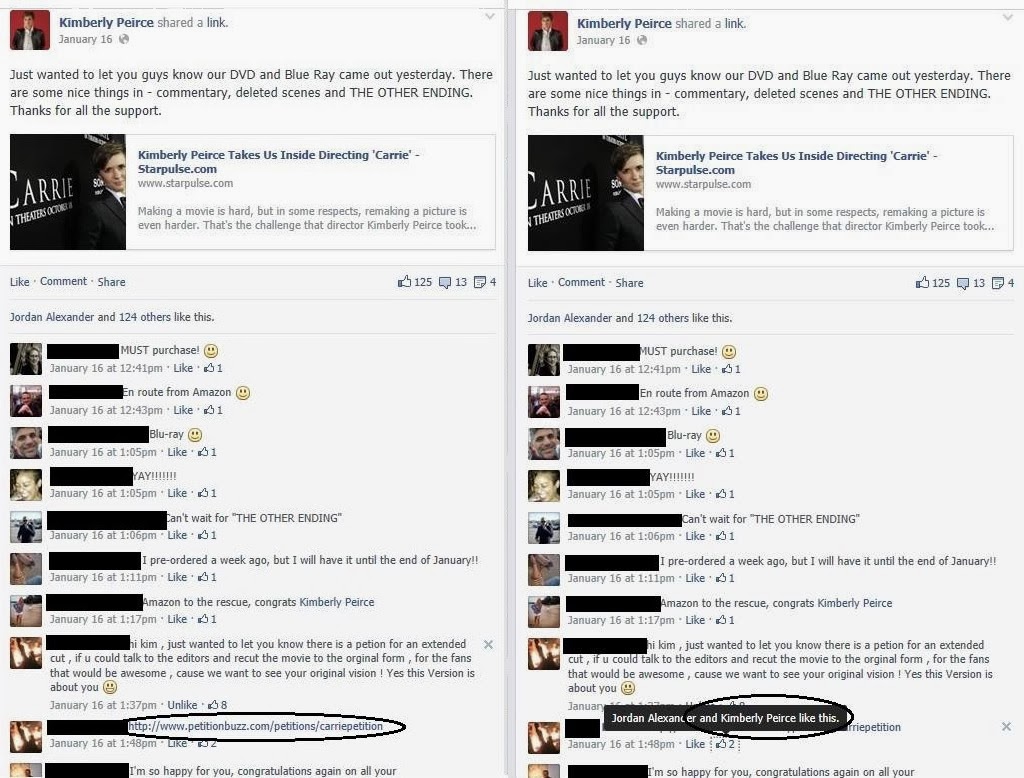