Stephen King and The Simpsons Part 1 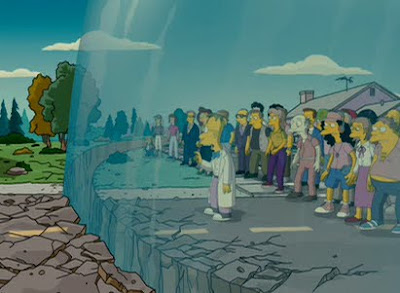 I'm reposting a short write from January, 2010. It's about the Simpsons and Under The Dome. Why? Becuase I can't believe there's still web chatter about this.
http://www.neatorama.com/2010/07/26/which-came-first-under-the-dome-or-the-simpsons/
http://johnnycat.wordpress.com/2010/07/22/which-came-first-under-the-dome-or-the-simpsons/
This annoys because it calls into question Kings integrity. Plagiarism is a bad word. What is right under the surface of this kind of argument is the notion that King is out of ideas; he is now turning to the Simpsons for material. So both the Simpsons and Under The Dome had a Dome -- might I point out that Old Yeller and Cujo both have a rabid dog?
.
If King is looking to the Simpsons to steal stuff, then wouldn't he be ripping from the Halloween episodes? Truth is, the Simpsons have often spoofed King's ideas.
.
Anyway, here's the orginal post:
.
STEPHEN KING AND THE SIMPSONS, 1
.
shhhh, quiet. I have to confess -- I like the Simpsons. Okay, so most Stephen King fans won't care if I like the Simpsons. But, from the conservative circles I move in, the Simpsons do not smack of family values.
.
As a kid my father and I bonded over the Simpsons. That was before we got the memo they were bad. Now my wife makes me watch it when the kids are in bed.
.
Mix Stephen King with the Siimpsons. . . I'm in heaven.
.
Now, before I do the post I was thinking about -- connections between King and the Simpsons, let's deal with this stupid question: Didn't King Steal Under The Dome From The Simpsons?
.
As for all the complaining that Under the Dome is a rip-off of the Simpsons Movie, that is just people who either didn't see the movie or didn't read the book; they are not the same!
.
First of all, the dome on the Simpsons is visible. ha!
.
Second, the Simpsons are able to dig under the dome. (Remember Maggie?)
.
Third, Holmer is able to ride a bike on the wall of the dome. I don't see Big Jim trying that.
.
Fourth, cities characters are different. Reverend Lovejoy is nothing like Lester Coggins. nor is Krusty anything like Pennywise. well, actually...
.
So all of that is lame, I admit. Here's a better set of answers:
.
1. King gave his word he did not steal the idea from the Simpsons. He's got a good track record of honestly telling us where his ideas come from. He said his idea for a dome came when he pictured a news conference where all looked normal until someone reached out and tapped on mid-air.
.
2. King proved it when he released the Cannibals. The main ideas for inner conflict with people locked into a situation were already present in that draft, which came long before the Simpsons.
.
conclusion: The Simpsons should be paying royalties to Stephen King. So there.
.
Check out part 2, http://talkstephenking.blogspot.com/2010/01/stephen-king-and-simpsons-2.html