This is the SIXTH PART of an article by Bryant Burnette summarizing the Golden Years television show.  As Bryant pointed out in the first post, we should not confuse the television series with the 3 hour hashed movie.

This was originally posted at Burnette's blog, thetruthinsidethelie.blogspot.com 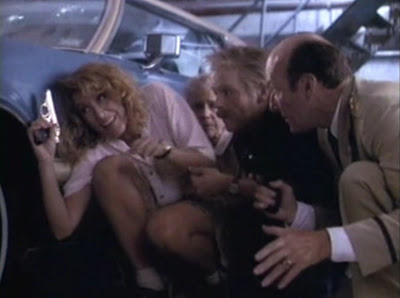 The penultimate episode of the series is the first to not have been scripted by King himself; instead, the teleplay comes courtesy of supervising producer Josef Anderson, who based it on a story provided by King. I've never been able to find any info on note on the production of this series, so anything I would have to say on the subject of why Anderson, and not King, scripted the sixth and seventh episodes would be sheer speculation.

So: let's indulge in some sheer speculation, shall we?

First off, I don't think anything nefarious ought to be read into it. Most television series have a stable of writers, all of whom collaborate on each others' work via the "writing room" process. In some cases, a head writer (or two or more head writers) may dictate -- sometimes with collaboration from their junior writers, sometimes without -- the overall direction of the story. Often, the head writer will write a story outline -- which can range from being a couple of paragraphs of general-idea-type stuff to being a full-blown, beat-for-beat telling of the story complete with stage directions and dialogue. Every show is different, as is every head writer. Once the junior writer has completed the teleplay, it typically will go back to the head writer for review and revision, and it is very common for the head writer to make massive changes. The head writer's name will not always appear on the credits for the revised version of the teleplay, either; if anything, it is more common for their names to not appear.


I've got absolutely zero proof that something like this happened on the final two episodes of Golden Years, but it seems like the logical conclusion to me, especially given the "based on a story by" credit King receives. There is also very little discernible difference in the way episode six feels, as compared to episode five.

In short: this feels like it was written by the same person who wrote the first five episodes.

Directing duties this time around were handled by Allen Coulter, who had much better work ahead of him.

The episode opens with Crewes and Moreland outside an airplane hanger, having a conversation about how Moreland's wife wants to do it more than once a week, whereas he absolutely cannot stand the thought. They are talking, of course, about square-dancing; this scene is painfully unfunny, and I'm going to choose to believe that Josef Anderson is to blame, and not King.


Terry and Gina are getting close to Chicago, but unbeknownst to them, the guy behind the counter at a diner recognizes them and calls the appropriate authorities. Jude has come up with a plan to find Harlan; he and Burton visit Billy the simpleton janitor, and there is an excruciating scene in which Andrews silently suffers through Billy's inability to focus. Eventually, though, he finds out that Harlan and Gina have a daughter named Francesca in Chicago. (Billy also tells him about a couple of sons, but Andrews intuits that because Francesca is blind, that's where her parents are headed. Okay, then...)

Maybe this is the 2013 in me talking, but ... was it really that difficult to find out info about somebody in 1991? Does it seem as if a shadow agency like The Shop ought to have been able to figure out who the Williamses' closest family members were much, much more easily than is being depicted here? I'll grant you, in this age of computerization, such things are taken for granted, so maybe I'm just not doing a good job of projecting myself mentally back a couple of decades. If so, by all means, somebody point me toward the error of my ways. (By the way, yes, I realize that Moreland hacked the computer and erased the info. But shouldn't Andrews have thought of the possibility of Williams running long ago, and already had the info in his back pocket?)

Terry and Gina reach Chicago, and Terry sees a guy in a suit and sunglasses standing outside the bus depot. She correctly guesses that he must be from The Shop, and so she coerces a group of conveniently-placed -- and incredibly poorly-costumed -- football players to go and rough the guy up. This provides enough of a distraction for Terry and Gina to get away.

Back at Falco Plains, Toddhunter has assembled a team of new assistants, all of whom are working like bees. One of them informs him that power is at 80%, and that they can't proceed any further without approval from Jude Andrews. Toddhunter pitches a fit, and storms out.

Meanwhile, Harlan goes to a diner and is flirted with shamelessly by Margo Martindale, who is understandably put off by the fact that he goes into a fugue state and his eyes start glowing green. Guess those hot-cross buns'll have to wait for another time.

Terry and Gina break into Francie's apartment while she's away, and when she comes back she is immediately distrustful of this pig who's with her mother, and of the story the two are telling her. Harlan shows up, and his face feels different enough that Francie starts believing them, and quick. She and Terry even manage to bond a bit over talking about what Harlan was like as a father. Apparently, h was the type of dad who was always donating to charities and supporting the little guy, and when his daughter started taking part in radical protests, he was proud of her. Terry correctly assumes that Francie's frustration lies in the fact that her father gave her nothing to rebel against.

Crewes, with the doltish Moreland along for the ride, lands in Chicago and there is a terrible scene in which the two of them interrupt a pilot -- who brought in the plane Andrews was on -- and a stewardess in mid-flirt. They take the two hostage and lock them in a room, where their randiness seemingly offers enough of a distraction that Crewes feels no particular need to worry about them. (There is an occasional tendency in Golden Years for characters -- ranging from minor ones like the pilot and the stewardess to major ones, like Moreland and Toddhunter -- to behave in ways that seems wholly divorced from what we might reasonably call "normal human behavior." King's character writing is a genuine strength in his prose; in his screenplays, he sometimes seems to be another writer altogether, and one who has never even met an actual person. The disconnect is sometimes startling, as in this scene with the randy pilot and his equally randy stewardess.)

Andrews and Burton are being escorted by a couple of other Shop agents to Francie's apartment. They are pulled over by local policemen, who are incredibly belligerent, especially once they find all the automatic weapons. This delay will prove to be crucial. It allows Crewes enough time to get to Francie's apartment and tell everyone they need to get moving pronto.

They do, but not quite fast enough. There's a shootout in a parking garage. Francie's seeing-eye dog, Whitney, gets killed while attacking Andrews; Terry gets winged, and Andrews' cheek is grazed by a bullet. A nameless Shop goon also goes down for the count. Despite the bloodshed, our heroes escape, but Andrews knows he's basically got them; all he's got to do is tighten the noose.

A great deal of this episode is utterly ham-handed, both in terms of conception and execution. The touches of humor are almost totally misguided. There are still a few good, grounded performances (R.D. Call as Andrews, Erik King as Burton, Harriet Sansom Harris as Francie) to help, thankfully. The long characterization scene between Terry and Francie is good, and Francie herself feels very much like a King character.

The episode overall, though, is more than a bit on the weak side.