Carrie: Doomsday May Have To Wait 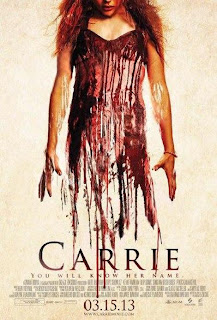 Looks like the upcoming Carrie movie has been postponed to October.  Chloe Grace Moretz's Carrie was expected in March.  This will make for a Halloween release of the film -- and a long wait for a much anticipated film.  The new date is October 18th.


So now let's talk Carrie. The remake, which stars Chloe Moretz and is directed by Kimberly Peirce, was originally supposed to be released on March 15th of this year, but apparently a light bulb has turned on in the collective heads of the folks over at Screen Gems and today is was revealed that they have moved the film closer to the most haunted date on the calendar. Moved back almost exactly seven months, the movie is now scheduled to be released on October 18th. The day is the last weekend before the release of Paranormal Activity 5 and it will directly face off against Luc Besson's Malavita and the Jeff Bridges-starring fantasy flick The Seventh Son.

If you're wondering why this didn't happen sooner, there's a pretty obvious answer: Screen Gems originally already had a movie coming out that day. No Good Deed, the new thriller starring Idris Elba and Taraji P. Henson was originally going to come to theaters on that same date, but now it's been pushed back to January 17, 2014 where it will go up against the cop comedy Ride Along, starring Kevin Hart and Ice Cube.

On another note. . . I  like the new poster a lot!  Of course, the date is wrong.  But the poster is AWESOME!