The Box At The Bottom Of The Closet

shhhh. . . quiet. . . my wife can't hear us talking about this.  See, we were discussing how full our bedroom closet is.  I might have said that none of the junk in the closet was mine, because I don't have a need to keep everything.   (EVERYTHING!)

So, when I came home from work yesterday,  there was a large  box sitting on the bed.  My beloved informed me it was MY  box.  Strange, I don't seem to remember owning a box.

"So what do you think was inside your box?" My wife asked.
I dunno.  Books?
"Well, you do have a box f duplicate Stephen King books.   But this box is full of Stephen King books on tape."
"CDs?"
"TAPES.  So you want me to throw them away,  or ebay them?"

I  didn't think much of it until I started going through the box.  Strange how things can cause of to  be sentimental, right?  I LOVE these tapes!  I've listened to them over and over and over! 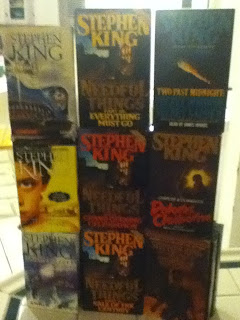 So, here is what was in the box:


So what will I do with the box of tapes?  I actually don't know.  Probably haul them down to the shed.  But then my wife will find them and tell me I can't say ALL the stuff down there is hers.  But it is.  Because the Christmas stuff counts at hers.