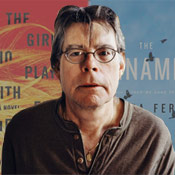 I really liked T.J. Tranchell's article "2012, The Year Of Stephen King."  It is reposted from yakimaherald.com with permission.  Thanks T.J. !

TJ is currently doing a something he's calls the Constant Reading Project. He told me, "I'm going to read every Stephen King book, in publication order. I just finished Carrie and the goal is to have them all read by Dec 31, 2012."  WOW!  It's going to be an awesome 2012 for him!  You can follow along at his blog: www.warning-signs.net

2012, the year of the King
By T.J. Tranchell
For ON Magazine

In the mid-1980s, Stephen King wrote about his fear of Friday the 13th. He mentioned that the year 2012 (oh, that doomed year) would have three Fridays fall on the 13th of the month: January, April and July. But King's paraskevidekatriaphobia -- the fear of Friday the 13th -- won't stop him from having a potentially banner year in 2012.

He's even getting a head start.

King's most recent novel, "11/22/63," is an 849-page take on how one man could change the world by stopping John F. Kennedy's assassination. The book has been out for about a month and has reached King's familiar territory atop the New York Times Bestseller List. The book also ventured into new territory for King when the Times included it as one of 2011's Top 10 books.

As of this writing, I still have about 300 pages left to read, so I can't spoil the ending for you. What I can tell you is that this book is at once a classic King read with familiar settings and characters and something wholly different. The book screams to have someone else's name on it, just to see if it would still be popular. (Of course, this trick didn't work for King when he used a pseudonym, so it's doubtful it would work now.)

As "11/22/63" fights to stay on the bestseller list, an adaptation of the book that many point to as King's first foray into the truly literary will air on cable TV.

"Bag of Bones," starring Pierce Brosnan and directed by frequent King adapter Mick Garris, will air as a two-part miniseries Dec. 11-12. Garris directed the 1994 epic miniseries "The Stand," which stands as his best work. He also directed King's original screenplay "Sleepwalkers," which is no one's best work.

From the trailers, "Bag of Bones" appears to be an atmospheric ghost story, with some of the same historical leanings evident in "11/22/63." It is entirely appropriate that the two should reach audiences at about the same time. The works reveal a truth one often forgets: A good writer can write anything, with no genre limitations.

As King takes steps to reach new audiences, he never forgets who put him at the top. On April 24, King is scheduled to release "The Wind Through the Keyhole," a Dark Tower novel. The Dark Tower series is King's true magnum opus, a seven-part fantasy Western that ties many of his other works together. It was a project he had to finish before he died. Apparently, he left part of the story out between the fourth and fifth books.

Then, in August (tentatively), King will release "Dr. Sleep," a sequel of sorts to "The Shining." The tale revolves around the now middle-aged Danny Torrance. Remember him? Little kid, spoke to his finger, REDRUM! REDRUM! and all that? Well, he grew up and is going to battle a horde of vicious, nomadic vampires.

King has said that some of his critics believe he's getting away from horror. His answer is "Dr. Sleep."
So 2012, a year with three Friday the 13ths, could mark the triumphant return -- not that he ever went away -- of the master of horror. Until then, there's the new book and a new miniseries to tide us over.