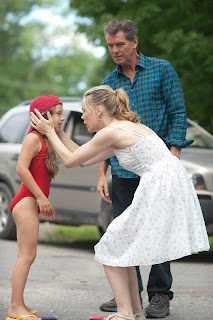 Abbie Berstein at Fangoria has a great article/interview about Bag of Bones with director Mick Garris.  (HERE)

There article is rittled with interesting things.  For instance, this is the first project that King and Garris have done together that neither have written the script for.  In fact, Garris says that King's involvement was completely unofficial.

About King's relationship to the mini-series, Garris said,


“[King is] not a producer on this.  He’s not officially involved, but because of our relationship, I would run all these things by him. He didn’t really give script notes, but I sent him first the feature screenplay and then the teleplay after that happened, and he obviously did have director approval and two or three of the leading actor approvals. Other than that, he wasn’t really involved, except as a friend.”

Garris also shares:
The article also reveals how they came upon Brosnan, and what he thinks of the Fangoria readership.  All worth checking out!