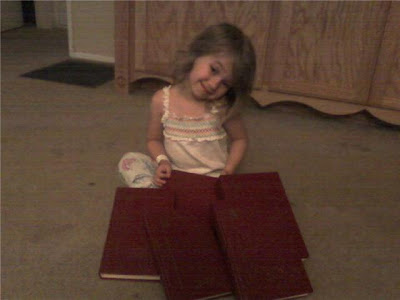 For the moment. . . I've given up on collecting a full set of first editions. It is difficult to Convince my wife to fork over the moolah for a first edition Carrie, The Dark Tower (she doesn't see the need, since I have a second edition. . . I'm neglected) or even a true first of the Shining. I do have nasty reporductions of Carrie, Salem's Lot and The Shining. Gag. But, for the the time being, I'm just going to give up on the hunt. Gasp. I did manage to get a full set of first edition Richard Bachman's. Not hard, though.
.

Most recently I have been buying copies of the Red Leather Stephen King Library books. I like these, and they do look cool on the shelf (though not as cool as a first edition Gunslinger, honey.)
.

These are beautiful books that were originally published by Book of the Month Club. I'm not sure of the whole history of them. They are bound in faux leather and King's signature appears in gold on the front cover. They appear to be almost exact reporductions of the original hardbacks, with these exceptions:
1. The cover is obviously red leather instead of a bookcover.
2. They do not have a numberline or much copywrite information.
.

Anyone know the full story on these books?