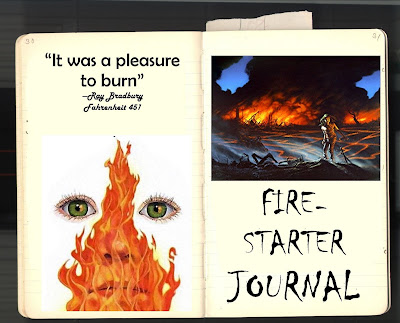 Wow, I really like this book.
.
Took my family camping this weekend, which meant a lot of hiking and exploring some caves. Wonderful! And on the long ride home all the girls fell asleep. Alas! Some uninterrupted reading time as I listened to this wonderful novel.
.
Just a few notes:
.
Bad Guys:
The "bad guys" (the shop) are certainly despicable. But in a big government sort of way! I really like having a goon named "O.J." I mean, the government is cast in the light of Capricorn One. . . which O.J. starred in. "Nah," you say, "it can't be a play on that O.J.!" Really? Well, the dude's other nickname is "the juice."
.
I like these people:
King started the book with straight action. In fact, I was worried this would be light on character development. However, as the reader goes deeper into the novel King has a skilled approach to characters. Much better, if I may say, than Grisham. Often in a Grisham novel I find myself really not caring if the lead character lives or dies.
.
Charlie and Andy are carving a place in my heart. I'm asking myself, why? What did King do to endear me to these people? I chalk it up to one thing: Good dialogue. Really! Other than just raw action, what King offers is convincing conversation. he doesn't drag it on and on, but what he does give is sharp. Andy becomes human as he talks to the farmer, Irv.
.
Adverb anyone?
By the way, there are a lot of adverbs in this book. I know that in On Writing King ranted against adverbs. And he admitted it was a case of "do as I say, not as I do." But at least in this case, I've liked them.
.
Heating Up
Now, for what I really enjoyed: The shoot-out at the O.K. Corral. Okay, actually it was just a farmhouse where two old people had taken Charlie and Andy in to their home. But the action, descriptions and and raw horror was splendid. Charlie manages to reduce grown men to burning "rags" and burns down the entire farmhouse! Sweet. And what's truly enthralling is when Andy realizes Charlie enjoys it!

Email ThisBlogThis!Share to TwitterShare to FacebookShare to Pinterest
Labels: Firejournal