The Movies I Wish They'd Make 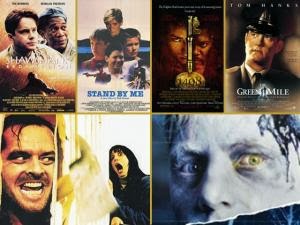 Kinda sad, isn't it -- no one asks constant reader what King books we'd like to see brought to the big screen.  Instead we have to stomach a parade of remakes.  News of a Pet Sematary remake is alive once again, and an IT remake, and a trilogy promised of The Stand, and a Running man remake, and there was that recent Carrie remake, and let's not forget the Salem's Lot remake and then there was that dreadful Children of the Corn remake (shiver.)

We cringe at a lot of these remakes because they are just so unnecessary.  I'll watch them, and probably enjoy them, all the while wondering what happened to Cell, From a Buick 8, Rose Madder, and all those gems in Four Past Midnight.  It seems someone buys the rights, and then they disappear into a dark hole.

Yes, I do know some of those are actually being made right now.

Remakes I would be just fine with:
IT (ONE season series)
Needful Things (as a mini-series please)
The Running Man
The Tommyknockers