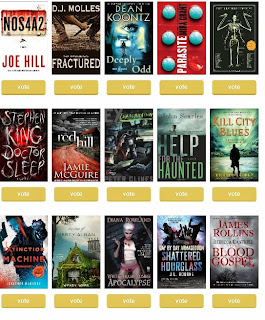 www.goodreads.com has nominated Doctor Sleep as one of the best books of 2013.  Other nominations include Joe Hill's NOS4A2 and Dean Koontz's Deeply Odd.  I've not read the Odd novels, but they seem to be getting a lot of attention.

Club Stephen King wrote to let me know that JOYLAND & AMERICAN VAMPIRE are also nominated for the goodreads choice  awards, in other categories.

It's a great time to be a constant reader!