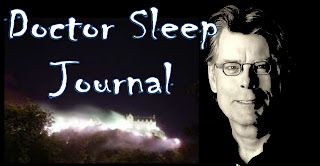 An unusual thing happened tonight.  I was out running, listening to Doctor Sleep.  I'm loving it.  That is, I'm loving the novel, not the running.  The novel helps me focus on something other than how bad it hurts.  But, really was swept away tonight with what was happening in the book.  When the naughty vamp tries to get in Abra's head, she has set a brilliant trap.  It's hard not to spill it all, because it's so good.  In fact, what happens is so good it made me say, "YES!" out loud as I ran through the desert darkness.

I love those "YES!" moments.  Times when King brilliantly weaves a story, and you don't even see it coming. At his best, King builds the stories tension, then releases a bit of tension by giving a small victory you didn't even realize was nearby.

Much of this book takes place in the world of the unseen.  It's a heady book.  A lot is expected of the reader when traveling these pages.  We must accept some things -- like ghosts and the ability to jump from one persons head to another.  Can you set traps in your mind?  Sure!  What's really nice is King's own confidence in story telling.  He doesn't feel the need to explain for pages and pages why this could really happen.  He just lays the story out and expects the reader to go with it.  Look -- he seems to say -- some people shine.  Those people who shine, they can do some pretty crazy stuff.  Now either accept that premise, or go read Twilight!  But what King doesn't do is bore the reader with pages and pages of how this stuff happens.

The Bad Guys Better Get It!

In Doctor Sleep, King has given us some pretty bad characters.  I think the True Knot are some of the worst monsters in the Stephen King universe.  They torture kids!  I hope with all my heart Mr. King has a real painful end for this lot.  One of the great things about Ken Follett's writing is that the bad guys must suffer such terrible ends.  I hope King can do that with Doctor Sleep.

Why does this worry me?  Because sometimes King gets a little realistic on us when it comes to the bad guys demise.  Sometimes bad people get away with bad things, both in life and the Stephen King universe.  There was no great moment in Under The Dome where Big Jim really got what he had coming to him.

People have pointed out that in the movie It's A Wonderful Life, old man Potter never gets slammed with the justice he deserves.  He gets away with it!  Things turn out good for Jimmy Stewart and family, but Potter doesn't get taken down.  And sometimes that's what happens in King novels.  For instance, when it comes to giving the bad guys their comeuppances, Mr. King is inconsistent.  Needful Things was also disappointing, though the novel itself was great.

In your opinion. . .
Which Stephen King bad guy got what he deserved?
And which SK bad guy really didn't suffer enough?