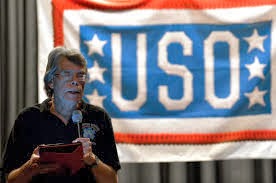 I really enjoyed Stars and Stripes interview with Stephen King at Ramstein Air Base, Germany.  This was King's first  European tour.  He noted that Europeans all speak English, though he -- like most Americans -- is not really fluent in a European language.

Asked who he would most NOT like to meet among his many characters, King cited Annie Wilkes.  Because she  would be his #1 fan

Some of these questions we've seen  before (where do you get your ideas?), but the answers are kinda fresh this time around.  I wonder if he spent a day coming up with new lines for old questions!  When he was asked what scares him, he said, "Big audiences."

I work daily with the USMC and  Navy,and so I found his comments about the military delightful.  "Fantastic dedication," King declared.  As with most discussions with King lately,things turned quickly to substance abuse.  King said he's talked to a lot of people involved  with getting the military personnel clean and sober.

King calls writing his "playground."  It's a place he enjoys going.  He then, in a little bit more serious tone, admits that there is a  "craft" aspect of it.  I'm glad he says that, because when he just says he's having fun, some people tend not to take him serious as a writer.  It's as if they think an artiest can't be serious about their work and still have fun.  By the way -- thinking of the "playground" comment -- I think King would spook all the other kids on the playground out!

About the writing process itself, King acknowledges that he never "completely" knows when he begins a journey where a story is going to end up.  "with a novel, in particular, it’s a little bit like launching an intercontinental missile from the United States and hoping to hit one house in the Soviet Union. You can’t guide it that exactly, but I do the best that I can. And, you know, in the end, the story tells you where to go. It’s not like having a GPS. It’s more like exploring a neighborhood where you sort of know where some of the houses are but not everything, and to me that’s the fun of it."


it was very challenging, and for a long time I had a piece of an idea of what I wanted to do with the story, but not a complete idea. And I kind of fought the impulse to write that book because “The Shining” scared so many people, but they were younger then and I thought well, it’s one of those things where a lot of people remember it as the scariest book they ever read and no way could I live up to that, but at the same time, that was the challenge.

But when I wrote “The Shining,” the main character, Jack Torrance was this alcoholic who was in what they call ‘white-knuckle sobriety.’ He doesn’t go to like AA meetings or anything like that. He’s just doing it on his own and that’s a lousy way to try to get sober. It’s dangerous and especially for a guy like Jack Torrance with a bad temper, it’s just asking for trouble. And Danny was the child of the classic dysfunctional family, alcoholic parent with tendencies towards abuse because he breaks the kid’s arm.

I thought to myself, ‘I wonder what happened to that kid? What happened to him when he grew up?’ And not only that, people would ask me sometimes. They didn’t do that about any of the other characters in the books. Nobody ever came up to me and said, ‘Well, what eventually happened to Paul Sheldon in Misery?’ But Danny, people would ask about it and I was curious myself, and I wanted to kind of show redemption in action, because Jack kind of gives in to the Overlook Hotel and to his tendencies. And I wanted to see what would happen if I had Danny be an alcoholic who actually got recovered from that.

Does King have a favorite among his novels?  Well, get ready for this. . . he says "Lisey's Story" is his favorite.  He acknowledges that the book was not a "runaway bestseller" in the likes of Under the Dome or Doctor sleep, but "it's a book that means a lot to  me."  That's really interesting to me, since I've had trouble really getting into Lisey's Story.  I may have to try this again.  However, when asked which story he is most "passionate" about, King called out Under  The Dome.  That seems logical, since the story itself stayed with him for  such a long time.

This discussion about how King has changed as a writer over time is quite insightful:


It’s a little bit like looking at pictures of yourself as a child and then looking at yourself as an adult and you can see that there’s a quantum change in the way you look but it’s so gradual and you’re so much inside of it, you don’t really see it happen on a day by day basis. I think that I’m a better prose stylist now than I was when I was younger but probably not quite as fiery. I just think as you get older, a little bit of the urgency gets lost along the way and what you’re left with more and more isn’t the passion that you had as a young writer and more the craft. I still like it. Sometimes that still breaks out, I’ll feel that passion.

Check  out the full interview: www.stripes.com