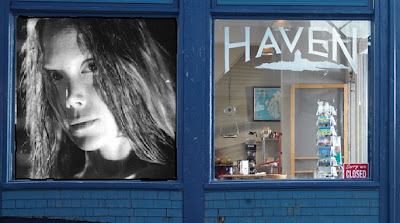 As always. . . just for fun
I wrote a post on the Carrie remake that pondered if Carrie White could possibly live in Haven. Well, probably not. Then I watched Fire Starter 2, Rekindled. Not really worth a review! Stephen King has said that he still thinks about to particular characters: Danny from The Shining and Charlie from Fire Starter. Hopefully Dr. Sleep is being joyfully created on a computer somewhere at this very moment!
.
Now that we've gotten a glimpse of what Haven is about, consider what King characters could live in Haven. I'll start with the obvious, feel free the post your ideas. I'll include people who died in the King novels, or my list would be superly short.
.
1. Carrie White, Carrie.
2. Danny Torrance, The Shining. (I'm still excited about Dr. Sleep.)
3. Charlie McGee, Fire Starter.
4. Johnny Smith, Dead Zone.
5. Andy McGee (and wife), Fire Starter.
6. John Coffey, The Green Mile.
7. Thad Beaumont, The Dark Half. ? Probably not, unless George Stark can come along. (For those of you tracking the Twilight Zone connections, I'm almost sure it's a nod to Charles Beaumont.)
.
Short list, right? And notice something: Most of the list comes from the very early King works. Of course, Green Mile isn't so early, but the rest are all before Needful Things. It points out a change in the pattern of Kings writing.
.
Early on King used characters who had a supernatural ability -- or possessed something supernatural. So Arnie had Christine and Louis Creed had the Pet Cemetery. Later novels have less people with secret powers and more unusual situations. the Tommyknockers is not about people with special abilities, but people who gain abilities because of an outside circumstance.
.
Okay, who did I forget?
.
Could Carrie White Live In Haven? -- http://talkstephenking.blogspot.com/2010/06/could-carrie-white-live-in-haven.html