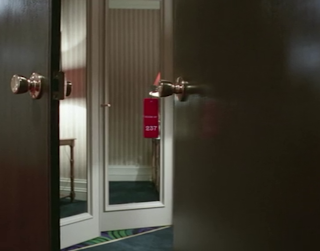 Okay, my turn!  I've posted some reviews of the documentary Room 237.  Michele asked me in a discussion about her review if I had seen the movie.  I had not.  Well, lucky me, I found it on Netflix.  Hard to pass up for free.

The movie leaves me dizzy.  Too many opinions all jumbled together.  It doesn't help  that  the movie relies solely on voice recognition for you to try and keep up with which crazy person is talking at the time.  I found myself thinking, "Now is this the moon guy, or the Indian guy?"

Here are my notes:

So what do I think?  1. I think these people need to get a job and stop watching The Shining all day.  2. These people think Kubrick way over thought this film.

Here's a few lines from a guy who  thinks The Shining is really about the Holocaust -- Because the typewriter is a German brand.  “That struck me, why a German typewriter.”  And the number 42 is seen throughout the film, because in 1942 the Nazi’s decided to exterminate the Jews.  It is also significant that the typewriter changes color in the film."

I get the feeling each crazy was interviewed individually.  Imagine a convention of these people. what of the typewriter guy met the patterns in the carpet guy and they met the moon faker guy.

Do I like the film?  The short answer is no.  I think it’s funny, and in that sense it’s enjoyable.  But just listening to crazy people read nutso ideas into a film gets tiresome.  My brain is mush having watched this.

Room 237 moves from being funny to boring.  One crazy person is worth a good laugh.  A crazy guy in a story keeps the humor rolling.  Si on Duck Dynasty is fun.  But if everyone in a film is crazy, it leaves the viewer feeling overwhelmed.  I hope Obama Care covers psychiatric care, I know some people who need it.

My preparation: Seminary.
I’m well acquainted with crazy interpretations of seemingly straight forward accounts from taking religion classes at the University and simply hanging around enough seminary students.  Some people do to the Bible what these folk do to The Shining.  In fact, sometimes the History Channel studies the Bible exactly the same way Room 237 studies the Kubrick film!

Crazy stuff I hear. . . (that’s WRONG, do not think I’m endorsing this!) -- It was really aliens who lead the Hebrews through the wilderness; Lazarus was really the apostle Jesus loved, not John ; There is a secret number code embedded in the Bible; 666 is. . . you name it.  It's stuff seminary students or religion majors discuss in the basement of dorms or in the cafe over 30,000 cups of coffee.  Double predestination.  Pretribulation rapture.

Symbolism:
My experience with college and seminary students (not teachers) lead me to a simple decision: I would accept symbolism being read into Scripture so long as I believed the author intended to use symbolism.  But I refuse to read symbolism into everything.  When doing exposition, context matters.

This is why I get frustrated with readers who see symbolism in everything King; or in this case, Kubrick.  Of course, these people actually think Kubrick  intended to put all this crazy stuff in  his movie.

Symbolism is a powerful thing for us humans.  We use symbols in the marriage ceremony; in the elements at the Lord's Supper; as a nation in our flags.  But when everything is a symbol, then symbolism is emptied of its strength.  It loses it's bite.  Save symbolism and secret messages for the times when the artiest is actually sending us secret messages.  King does it all the time, but readers look goofy if that's all they see.  The story is lost in the search for deeper meaning.

The suggestion that the carpet had some kind of sexual energy in its swirl patterns is really just a slap at the viewers intelligence.  It's a cool pattern, but I wasn't thinking sex until someone started finding it in the carpet.  But hey, my eleven year old spots monsters in the carpet -- I guess she's right on track to play ball with these people.

Cartoon characters on the door -- the big one being dopey.  But when we see the door again, dopey is gone.  Could it be a symbol that Danny is no longer a dope?  NO!  It's a continuity error.  But I do think dopey is near by.

Too much symbolism can cause you to lose sight of the intended beauty. Does it matter that according to the floor plans there shouldn't be a window in the office?  No!  Because they're not doing a movie where you are supposed to keep up with the floor plan.  Kubrcik was making a movie about a haunted hotel -- and a window opens the scene up!  Frankly, it keeps the viewer from feeling like it's all happening on a set.  Have these people not seen Star Wars?  I'm pretty sure there were few windows in the original Cloud City floor plan, but Lucas added them later because they opened the scene up.  Kubrick has a window in the office for the same reason, because it opens the movie up.  It's good movie making, not symbolism.

So. . .
What is the secret message hidden in The Shining?  Is it about Indian burial grounds?  Is it about the Apollo moon landing?  Should we try and play the movie forward and backward at the same time?