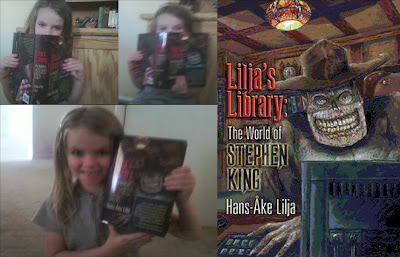 .
Lilja's Library has been the best Stephen King website out there for years. There's several reasons: He seeks out and gets the best interviews. This includes interviews with King himself. Movie directors, artist, other writers, secretaries all gladly answer Lilja's questions.
.
The website is also successful because it is up to date. There's a lot of sites that lag way behind in their news. You can stay up to date by friending him on facebook.
.
I have enormous respect for his knowledge and genuine humility. Those two don't always go together!
.
Lilja's Library, published by Cemetery Dance, finally made it to my mailbox this Summer. That's a long journey, when you think about it. From a computer in Sweden to the California desert. . . those words have gone through a lot before they get to me.
.
This is a big book. Not over sized, just full of content. I enjoyed all of it!
.
The problem:
.
As soon as the book arrived it presented a problem for me; do I read it cover to cover, or by topic? I love books that are just full of information, but don't have to be read in order. So, I happily bopped through this book in the random order that I wanted. I used it as a reference, something to pass time when waiting in the car for my wife and at bed time.
.
The only problem with not reading it in order is that I soon become confused as to what articles I already read. That's okay, I just read some of them again.
.
What I like:
.
1. Lilja's narration is chatty and easy to understand. He isn't trying to impress me, it's more like he's a friend telling me about his most recent read.
.
2. Pure energy! The book is written with real passion for the subject. You never sense that he gets weary of all the writing. I think one helpful thing is that the book is a collection of essay's and reviews from his website. So it wasn't done in one long sitting.
.
3. The interviews. This surprised me, but I really enjoyed the interviews. All of them were great. I don't usually get real excited about interviews, but Lilja asks some great questions. His down to earth tone puts people at ease. He asks stuff the constant reader wants to know.
.
4. Reviews. Lilja doesn't pretend to like everything Stephen King has written; but he's not petty. He doesn't pick on stories or spend his reviews complaining. In fact, he often finds positive things in stories or books that just didn't sit well with me. His reviews sometimes show me hidden gems I missed. I like his positive attitude toward King and the S.K. universe.
.
It did become something of a joke for my wife (who would read me the book as I drove places.) I would name a S.K. book or movie I really didn't like. "Hey, let's see if Lilja liked it!" Most of the time, he did like it, and had found something to like that we'd missed.
.
There are some things in the Stephen King universe I would have passed up, but reading Lilja's Library has caused me to check it out. For instance, the black and white version of The Mist. I would have completely ignored this DVD if Lilja hadn't so adamantly recommended it. (He really likes the movie version of The Mist.)
.
5. The reviews cover a large range of things. Lilja doesn't just review the books and short stories, he reviews the books in a lot of different mediums. For instance, he covers: Audio editions, movies, scripts, television episodes and more. In fact, he even gave a review of a replica of Christine.It represents what it was when it was written.
.
Sometimes he has reviews on things I didn't know existed. Like BBC radio shows.
.
6. Lilja does a good job making a distinction between audio and hard copies of the books. I would ahve never caught the differences, but he is able to explain how different media bring changes to the story.

Sometimes you have to remember that articles were written first for Internet. Lilja will refer to a picture (not present in the book) or some other feature that was on the website. I really like this, since it shows that they didn't try and change everything for the book.
.
If you are a Constant Reader, you'll like this book a lot.
.
LINKS:
Buy it here: $40, http://www.cemeterydance.com/page/CDP/PROD/lilja01
My interview: http://talkstephenking.blogspot.com/2010/05/interview-with-lilja-of-liljas-library.html