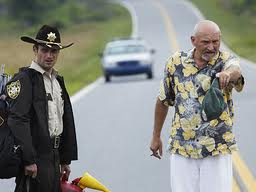 Frank Darabont -- known by King fans for his work on THE MIST and THE GREEN MILE -- is suing AMC, claiming that  they are withholding profits generated by his series, The Walking Dead. The series is in its fourth season, with each season progressively drawing a larger audience.


Frank Darabont, who developed the TV show about a zombie apocalypse and was fired after the first season, filed the lawsuit on Tuesday in a New York State Supreme Court.
Darabont said that the way AMC is calculating the show’s licensing fees is depriving him and other participants of tens of millions of dollars, the lawsuit stated.
AMC spokesman Jim Maiella declined to comment.

The full article is at: bangordailynews.com