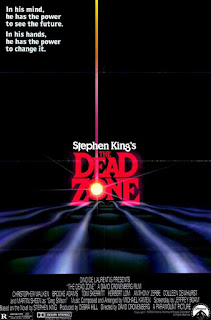 I can't finish a Stephen King book and not watch the movie.  I just have to.  Maybe, I think, the book will come to life on screen and I'll re-live those wonderful scenes.

This is, of course, a set up for failure.  In fact, movies I liked before reading the book, feel flat after reading the wonderfully textured novels by King.  People I feel like I know well, because I've spent time in their head via Mr. King, now seem pasty and cardboard.

So, that brings me to The Dead Zone.  I read the novel in marathon race with my wife.  She read on Kindle, I listened on audible.  I beat her.  (Double speed, my friends.)  Now, let me tell you up front, I've seen the movie before.  I'd forgotten everything except key scenes, and the vague memory that I'd liked it a lot.

The Dead Zone Is Real:

Can I ask right up front: Was there a shortage on extras when they were filming the Dead Zone?  We start at the Carnival.  A scene described as something out of Ray Bradbury's Something Wicked This Way Comes.  Skip the lucky streak at the game booth, and instead we watch Johnny and Sarah dip up and down on the roller-coaster.  But -- they're all alone.  Who gets to go to the County Fair and ride the roller-coaster all alone?  It wasn't closing time.  But watch, it's just them, bopping up and down and all around the track.

Pretty soon, we are ushered in to the local hospital where Sarah comes looking for Johnny.  She bursts in to what could be a mansion, but it's the hospital.  "Where's the emergency room?" she asks, and is directed up large wooden stairs.  Stairs?  Hospital?  It doesn't look like a hospital.  Did they run out of white paint?  But it gets better.  Like the fair grounds, all is dead in the hospital. As in. . . no one is there!  Apparently it's a slow night in the E.R.  If there were budget cuts, I'm pretty sure they came out of the extras.  Because there are almost no background characters throughout the movie.

Instead of having a medical team seeing to him, Johnny has one sole doctor.  Because, you know, that would require more. . . extras.

Finally at the Stillson rally, where. . . . BOOM, there are people.  And the biggest political sign I've ever seen.  Ever.

Do movies like this make you wonder some things?

1. Who cut Johnny's hair all those years he was in the coma?

2. Does the truck driver and the accident remind you of Pet Sematary?  As in, all that's missing is a kid running into the road as the accident happens.

3. How did his parents know when he would wake up?  They were right outside, waiting for him.

4. So Frank Dodd killed himself by jamming sissors up his mouth -- that was his best plan?  he's a cop with a service revolver.

5. Does everyone have a bowl haircut? 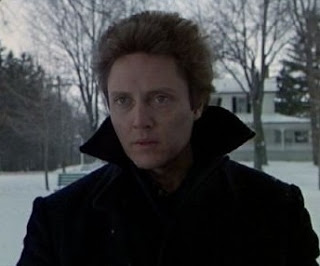 6. Did Johnny notice his jacket makes him look like a vampire?

8. That's how we launch nukes?

Okay, enough silly moaning.  I still like the film.  And the movie is a fair representation of the novel.  The scenes are put together at almost the same pace as the book, without the early connections to Greg Stillson.  So there's not the same feeling of the two stories moving toward one another as there was in the book.

I think the visions are far more intense in the movie than they were the book.  I also liked mama Dodd going after them.  Christopher Walken does a nice job showing the conflict inside of Johnny.

Email ThisBlogThis!Share to TwitterShare to FacebookShare to Pinterest
Labels: The Dead Zone, The Dead Zone Movie