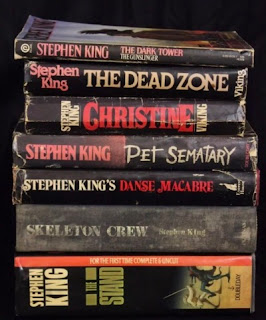 You don't need me to tell you the Dead Zone is amazing.  What you might need is a prodding to go back and read it.  Tight, compact, well written, suspenseful are all words that can describe the Dead Zone.

I was drawn to the Dead Zone by Chad Clark's book, Tracing The Trails. Clark's book about King and his work was so good, it actually made me rethink some of the older books I hadn't touched yet.  In particular, Dead Zone and The Dark Half.  His reviews made me hungry for vintage King.

Now, let me tell you what a Stephen King collection really is --
It's a Time Machine.

There you have it.  That's it.  It's like taking a trip back to specific periods of time.  You don't get to take these trips alone, though.  Your traveling companions, in this case, will be a man cursed with an ability to see into people; and a deranged politician.  I like the books from the seventies because they have a unique feel to them.  Sometimes King takes us back to an era.  Books like 11/22/63 and Joyland both returned us to other eras.  So did IT.  And King was masterful.  But it's those old books themselves, written in the time they were set, that really makes me feel the era.  Because King innocently tells us what's going on all around him.  He doesn't have to try and remember what was happening; he's just describing the world he lives in.

King mentions things that I think he wouldn't because a modern audience wouldn't know what he was talking about.  John Denver is playing on the radio. Remember him?  (I think the song was Country Roads.)  And my favorite not to another author came early in the book when King compared the carnival to Something Wicked This Way Comes, by Ray Bradbury.  King once said that without Bradbury, there would be no Stephen King.

In The Dead Zone, there is a wonderful scene in which Johnny Smith meets Jimmy Carter.  And he looks right in to Carters soul.  I loved it.  We forget that even politics of the late seventies were not as nice and clean as we remember them.  The smiling man from Georgia was a breath of fresh air after the corrupt Nixon years.  A man, some felt, who was just too good for Washington.  What I appreciated about the Dead Zone was King's ability to bring me back into the politics of that era, without a lot of heavy exposition.

I also want to note that I appreciate King's flawed characters.  Johnny might be an all american nice guy, but he still makes decisions that leave me totally frustrated with him.  I don't want to give anything away, so no further comment, just that Johnny sometimes takes his own path.

Email ThisBlogThis!Share to TwitterShare to FacebookShare to Pinterest
Labels: The Dead Zone, Tracing The Trails