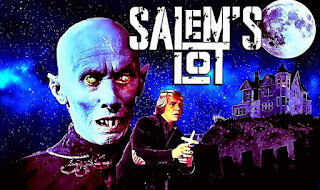 Here’s the deal at Talk Stephen King: If you haven’t read the book, don’t read my comments on the book.  Because, believe it or not, I’m going to talk about what I liked and didn’t like about it.  And after all, you’ve had a good 44 years to pick this up and read it.

My wife and I seem to be on a Summer Stephen King kick.  She reads and I listen, and we see each day who is ahead.  We are blasting through the early King works, and I think both of us are just transfixed by King as a young writer.

I’ve known forever what Salem’s Lot is about, and tried to read it more than once.  I first got Salem’s Lot when I was a teen, and it was in the pile of Stephen King books my sister brought home to me from the bookstore.  After reading the Stand in one breathless Summer (1989 maybe) I had to have every book.  Salem’s Lot was mixed in with IT and Tommyknockers.  But I struggled with Salem’s Lot.  The magic just didn’t settle over me until recently.  King builds a big cast of characters and was always hard for me to keep up with who’s who among the minor towns people.  These days, I just ask my girl, “Who was that?”

I also first struggled with this book because I didn’t understand the name.  Was it Salem’s Lot or Jerusalem’s Lot?  I know King explains it well, but I still got confused as a young person.

I read the book a few years ago, and loved it.  And now, I've returned, and once again the spell has fallen, and I’m so in love with this vampire book.  It’s creepy, action packed, and no one is safe.  No one.

Ben.  Now, on earlier attempts to read the book, Ben is what I didn’t like.  I remember reading about his first encounter with Susan in the park, and what should she be reading?  Why, his book, of course!  I thought: This is just too much.  No way.  But, this time I caught something that made the scene work for me.  King himself suggests that there is something predestined about their meeting.  As if other forces are at work to bring them together.  It is, as the Ben things, just too easy.

By the way, Ben is a Baptist.  I only point that out because usually any Baptist in a Stephen King book is going to be a raging loon.  (eg: Needful Things) Now, he’s not a practicing Baptist, but, take what you can get here.

Symbolism: How do you get rid of a Vampire?  What lore do you trust?  Salem’s Lot relies on two steadfast rules: The first is the power of the crucifix to drive back Satan.  The second is the myth that a vampire has to be invited in.  They don’t just burst into your house and ravage the place like thugs.  We will discover later that the crucifix itself holds little power, but only true faith has the strength to destroy Satan.  Trust me, there’s so much to be said for that!  I love it.

How does young Mark now that a Vampire has to be invited in?  They don’t teach that in school.  Here’s what’s great – he knows it from his monster magazines.  That’s wonderful!  In his introduction to Salem’s Lot, King talked about what his mother would call garbage.  Those monster magazines certainly would count as garbage.  But King uses those great old magazines to dispense bits of truth that would actually help a kid in a fight with a vampire.

Signs of the times: A few things lock Salem’s Lot the novel into the time it was written.  Technology in particular.  People listening in to one another’s conversations; and when they need to call for an ambulance, they need an actual number, because this book was written well before the 911 system was in place.  Imagine that.

Real people: Salem’s Lot is inhabited by people caught up in what seems like real problems.  Affairs are taking place; a young mother slaps her child; a young deputy is sure he could do better than his boss, the constable; the caretaker at the dump loves shooting rats.  King doesn’t just give us a vampire yarn, but the book is rightly named Salem’s Lot.

The original title for Salem’s Lot was Second Coming.  I heard speculation that it referred to Bens return to Salem’s Lot.  I think it had more to do with vampires reappearing after a long silence – this time in America. 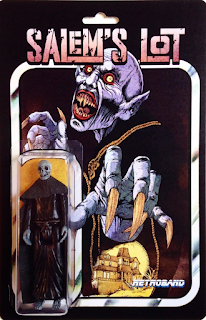