More Nods From THE SIMPSONS 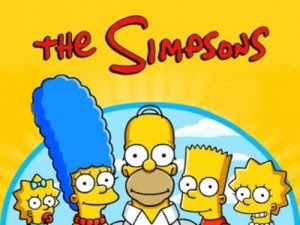 Stephen King and the Simpsons have a special relationship. The other night I was watching an episode in which Bart's girlfriend for the episode was reading a vampire romance novel. Of course, Bart had to explain that vamps are supposed to be scary. Wonder where he learned that, eh!
.
Now I know some of you will say, "Get real, the writers of the Simpsons are not watching Stephen King that closely." Well, I would simply ask -- did you see last nights episode of the Simpsons? Did you? Did you? DID YOU?!
.
The Fool Monty:
Episode 503
11/21/2010 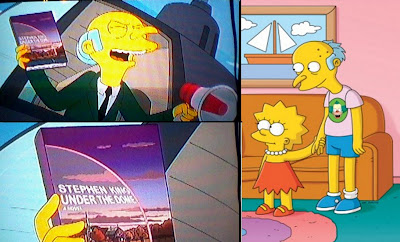 So, I don't have the attention span to recap an entire ADHD Simpson's episode; but bottom line -- Mr. Burns loses his memory and the town tortures him in a variety of ways. When he gets his memory back, he decides to punish Springfield. His plan is sweet revenge, Stephen King style. Literally!
.
Mr. Burns, "Taking an idea I got from a Stephen King book, I'm going to cover this town with a dome!" Burns holds up a copy of Under The Dome. Burns laughs -- Mahahahah. Trailing his helicopter is a fleet of government choppers towing a huge dome with birds nesting on the top.
Lenny, "It's been done."
Mr. Burns, "Really? You don't say." To Smithers, "Did you know about this?"
Smithers nods.
.
I am not going to explain all the reasons this is funny; if you don't get it, just resign yourself to a lifetime of confusion as a cultural underling.

Email ThisBlogThis!Share to TwitterShare to FacebookShare to Pinterest
Labels: Cultural References, The Simpsons, Under The Dome