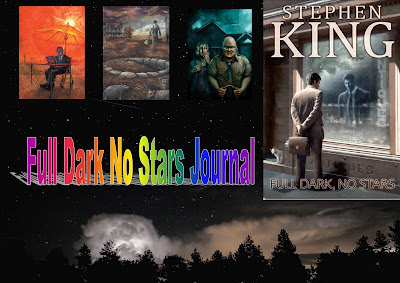 I got an audio copy of Full Dark No Stars yesterday. Of course, I immediately started listening. I also had to stop the tape until my daughter was asleep because. . . it's a Stephen King book.
.
One frustration
A frustration with the audio book is that the stories are not labeled on the CD's. This means you cannot listen to the novella's in the order that you want. Not a big deal when it's short stories, you just trudge through. But in this case, you have to listen to entire Novella's! A little frustrating.
.
1922
The book starts with a story titled 1922. It is grim. Delightfully grim! The story is wonderful, dark and well told.
.
So far a likable character has not appeared. The narrator, Wilfred James, has a wonderful way of explaining his actions as that of almost a different person. "I believe there is another man inside every man, a stranger . . ." Of course, the good man is himself... but the bad man who does the naughty things, that man is another man living inside him. I realize that sounds really lame when I write it, but King plays this well enough that it would have pleased Robert L. Stevenson.
.
The stories are all stories of revenge... I think. Told in the first person, at least 1922 -- it is reminiscent of Poe. Thus far, I can say confidently that this stuff is raw horror. Honestly, it's the reason most of us read King.