The Stephen King Companion: Four Decades of Fear from the Master of Horror 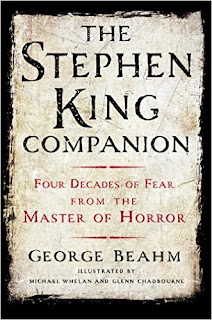 Batman and Robin have an Altercation was awesome.  But there were others there that I just didn't get.  A man and woman have an argument.  The woman dies.  That's all.  On to the next story.  . . . HUH?  What was this story about?  Reading books of short stories makes me feel like a golf ball hit full swing in a tile bathroom.

I feel bad.  Like I did when I gave up on Insomnia.  Am I still a constant reader if I drop out on the latest book?  Of course.  I just don't do as well with those short stories.

By the way, a word of parting on Bazaar -- I really like the introductions King does to each story.

Setting Bazaar aside, I've started reading the new George Beahm book, The Stephen King Companion.  I think this would be companion book number 3 for Beahm, but I'm losing track.  He is also author of America's Best Loved Boogeyman and several other King books.

The book does two things in the early biographical portions --
First, Beahm does an excellent job introducing new biographical material that was previously absent from other works.  Drawing on PBS' investigation into King's past, we learn about King's father, Donald King, and where he went after he left the family.

Second, most of what Beahm introduces thus far is not really new.  Meaning: He doesn't seem to have gone and done new interviews -- he is pulling already published materials together into a single source.  That's okay, because I like it.  But I am starting to cringe at the sheer number of times The Stephen King Encyclopedia is mentioned.  I read that book, and loved it!  And I'm enjoying Beahms book.  But (BUT!) this is starting to feel like an updated version of the Encyclopedia with a new format.

WAIT -- I was wrong.
It would be easier to just erase the above.  The danger in blogging as I read is that I complain and then get proven wrong.  There's plenty of new stuff here.  Just read a great (GREAT) interview in the book that is with one of King's childhood friends.

Whining aside, the book really is very good.  Beahm is my favorite King biographer, and his insights are always sharp.  Besides, he holds a special place in my heart because he once confessed (I think in the first Stephen King Companion) that he just couldn't get into the Talisman.  I felt such sweet comfort when he said that.

Strange, isn't it, that I would go from reading Stephen King to reading about Stephen King.  I'm sure I'll return to the Bazaar, but for now, George Beahm has me pretty engrossed.

By the way, the introduction by Stephen Spignesi was worth the price of admission.